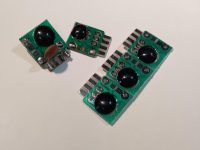 In my case, I searched, and if you dig deep enough you can find the relevant information.

So anyway, I started out with the smallest one – an alarm/siren module that is called a “119 siren chip” and the PCB code is LX10. There are a couple of different ICs available of this same type, dunno how they differ, might be just a different sound encoded. And it’s sold in bulk of 5 pieces for €0.58.
For this one you have to add a resistor, an NPN transistor and a 104 ceramic cap following this schematic below (which I found on the web).
It works best with a very small membrane speaker, I used a 0.5W 8ohm one. And changing the resistor changed the speed and pitch of the sound produced with lower values making the siren faster. Also it’s powered from 3V. 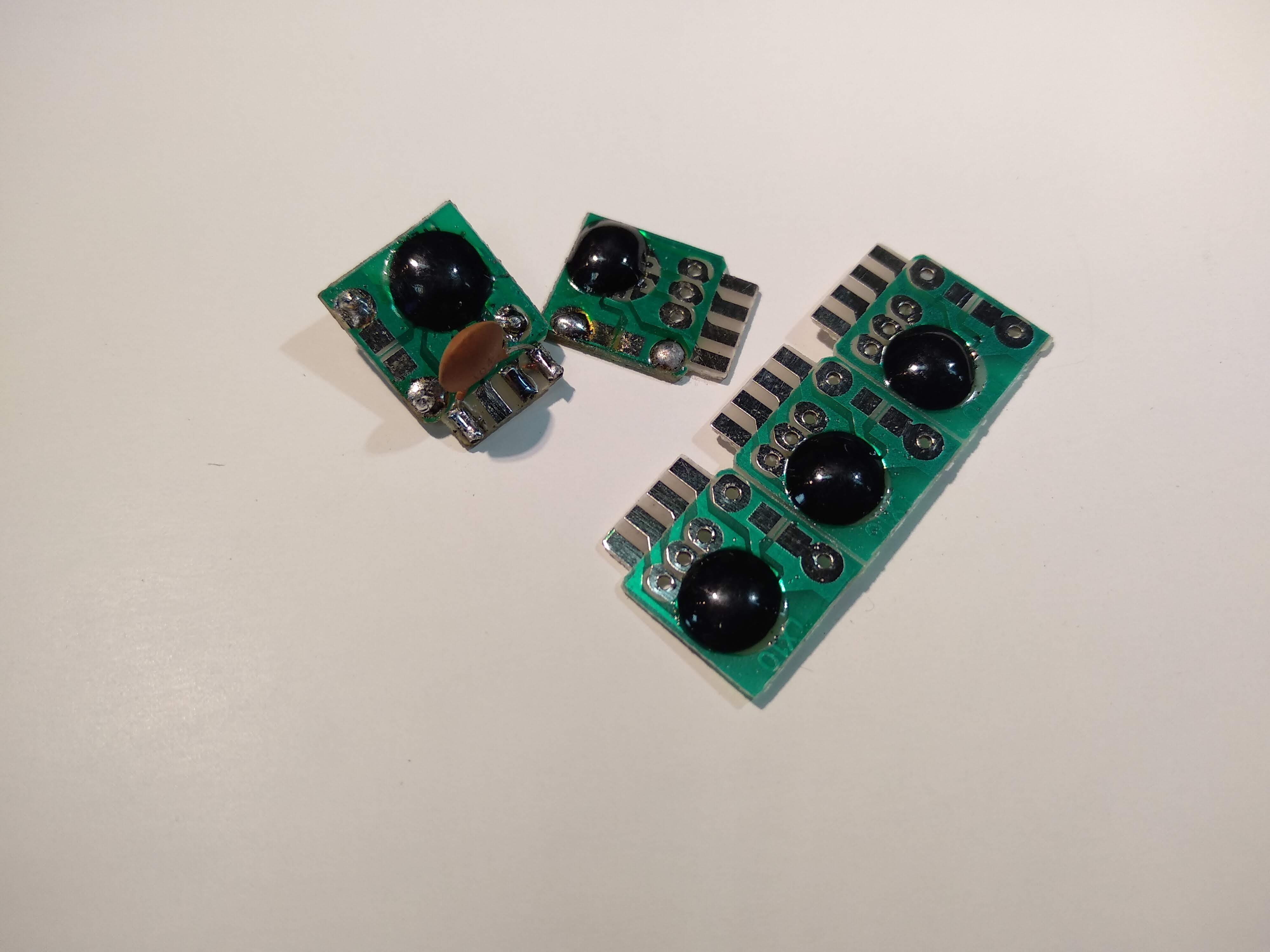 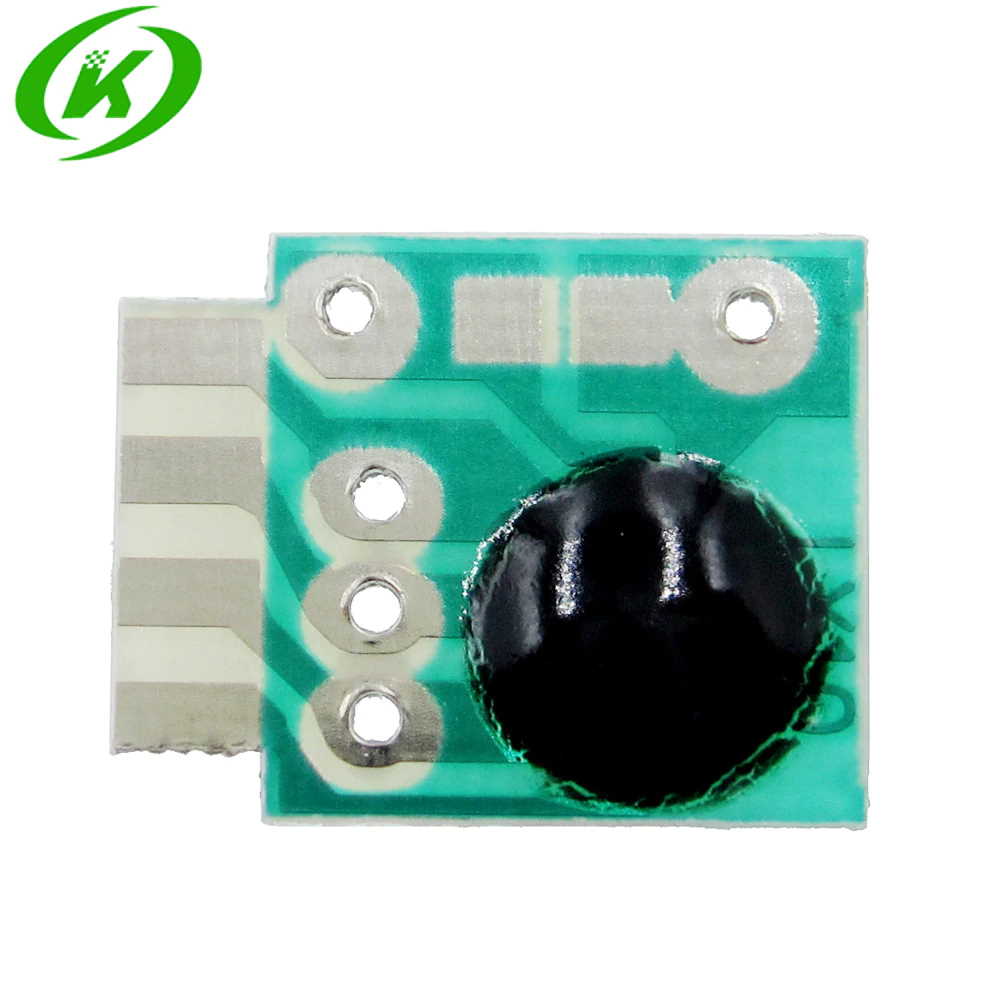 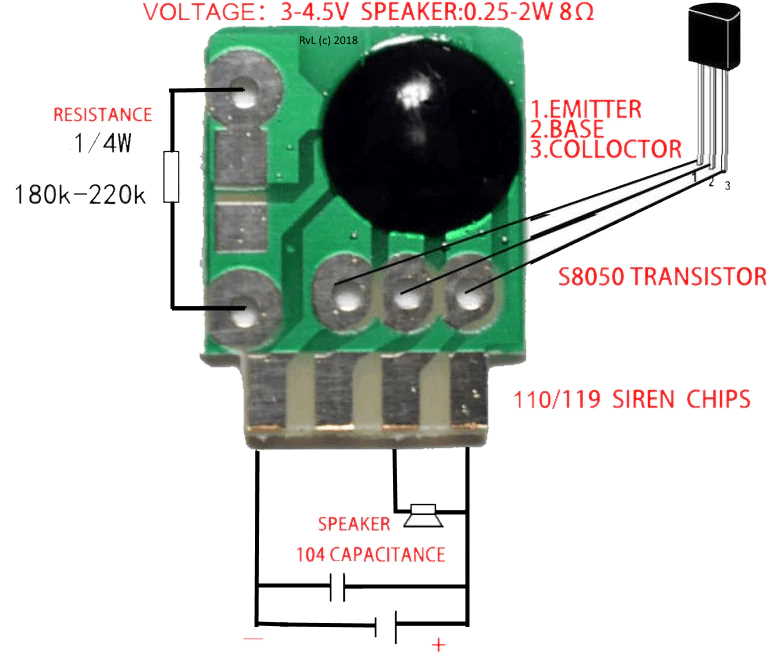 Next one I tried had a code LX9300H on the PCB and it’s supposed to be a happy birthday melody of some sort (might be the case with another version) but this melody is Bagatelle No. 25 in A minor (or Für Elise in laymans terms). There are apparently a non H version that has a little different layout and I don’t know what it does.
Again, add an NPN transistor and a 104 cap following the schematic below I also found on the web and it’s sold in bulk by 5 pieces for €0.87.
But for this to actually play a melody, you need to short the two contacts marked yellow. 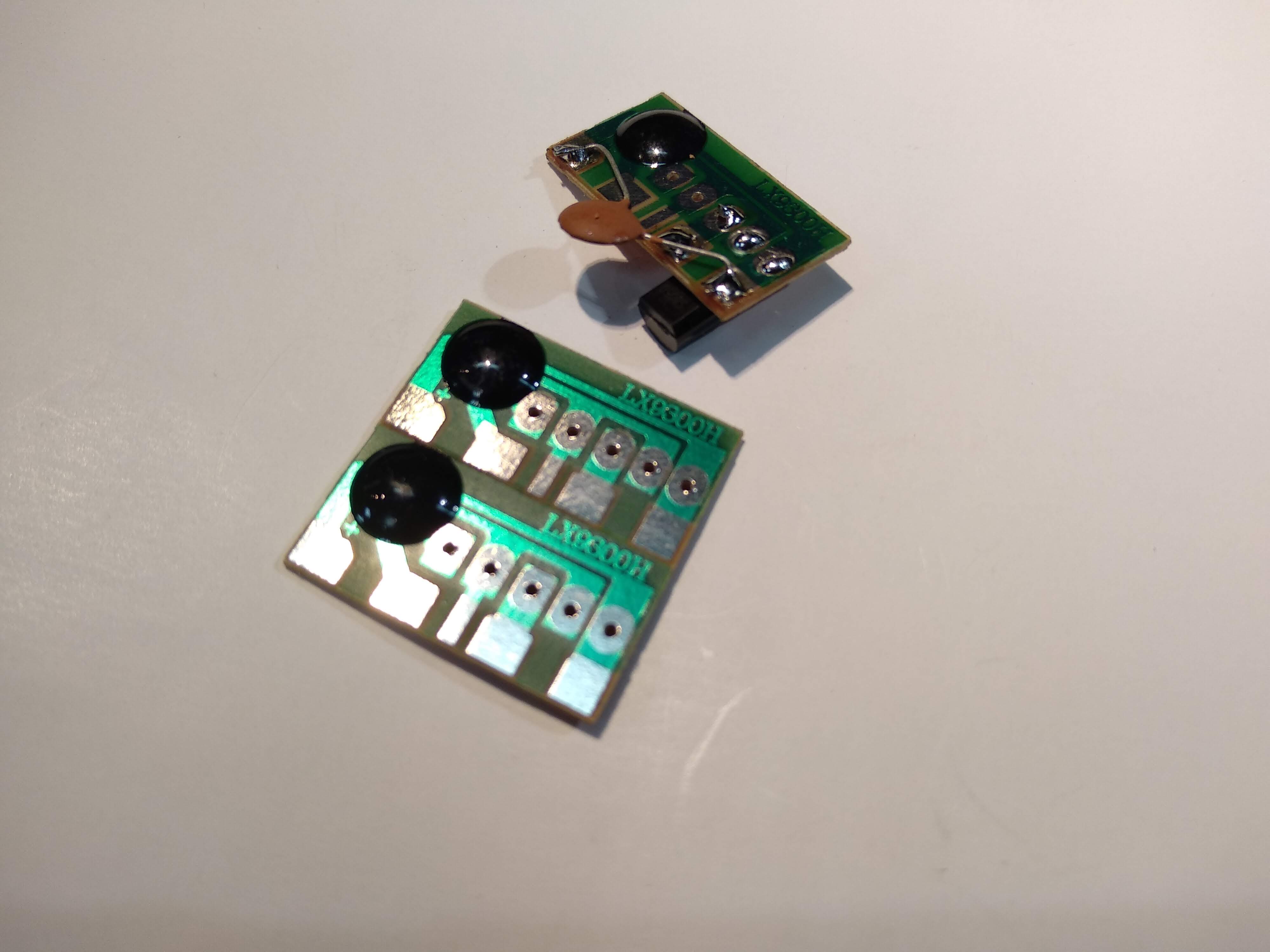 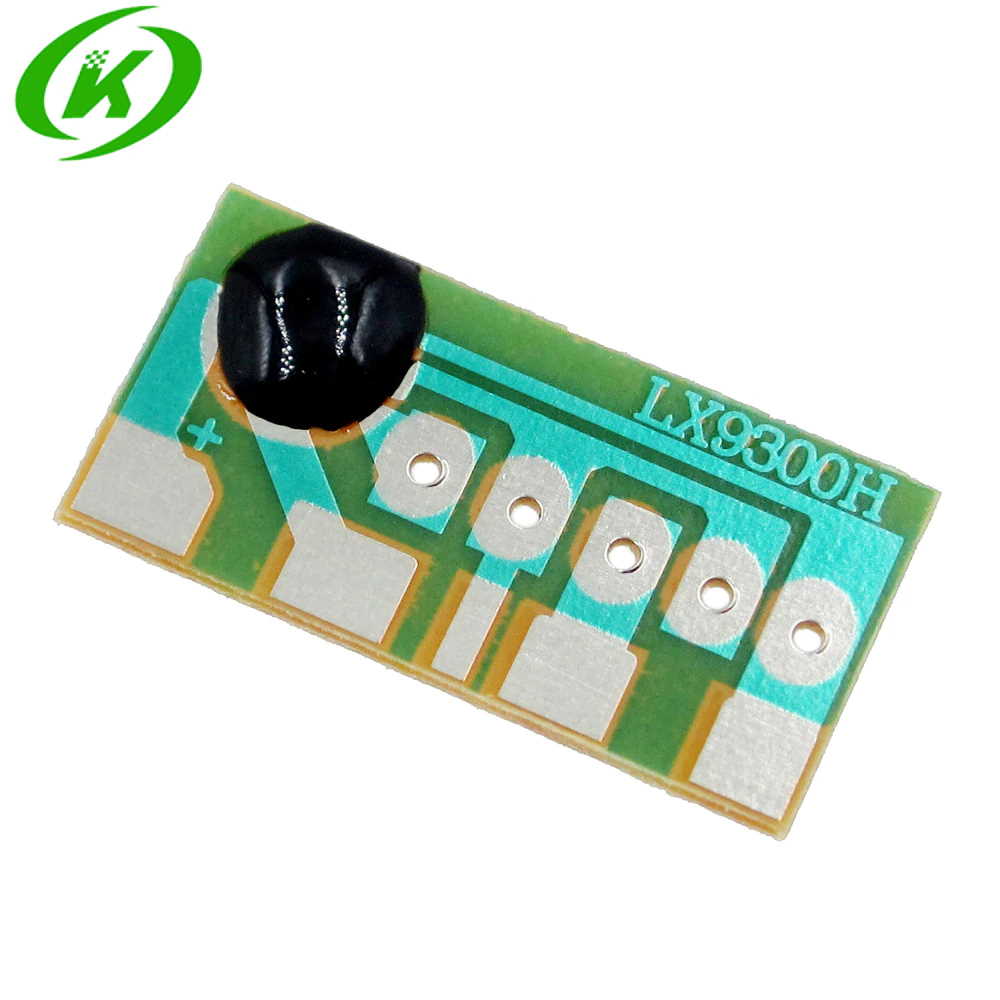 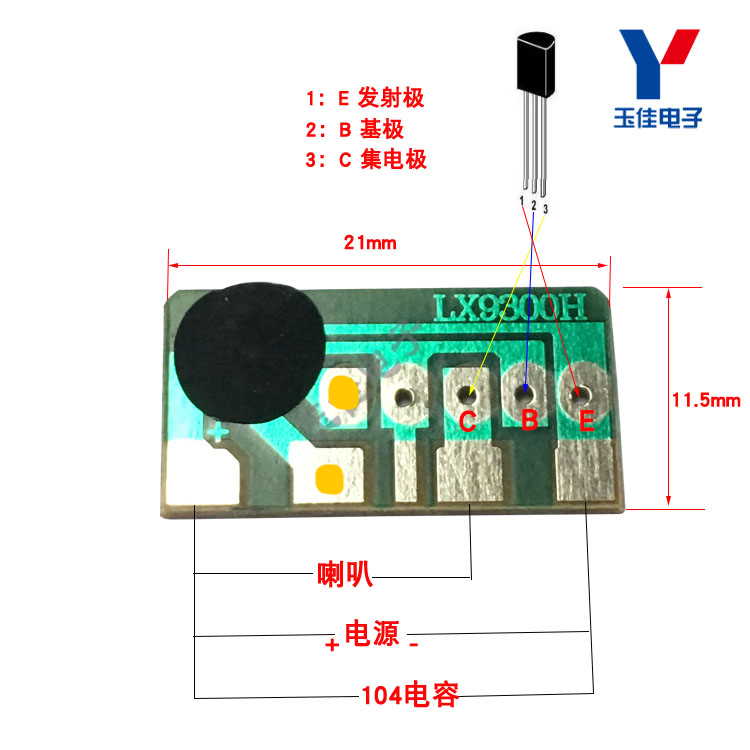 This is the weirdest one of all that I bought and it actually has 12 melodies (well, sounds at least).
Connecting by the schematic I found deep on the web you can see it just has 2 buttons to play next or previous sound. You might notice that I didn’t need to solder any components on it, but I threw on the 104 cap, never hurts :P
Also, this chip needs 5v and ~200mA to run properly. 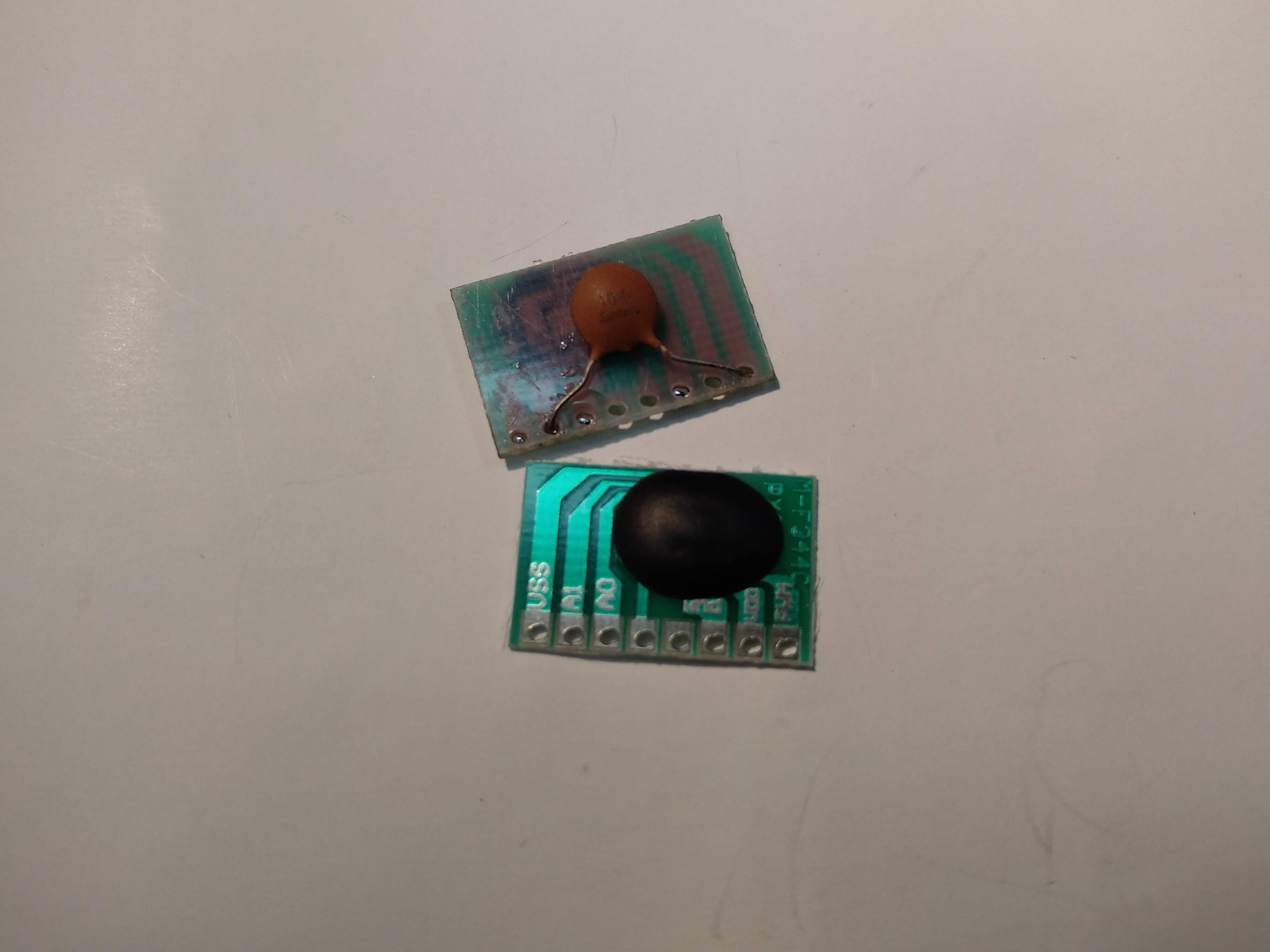 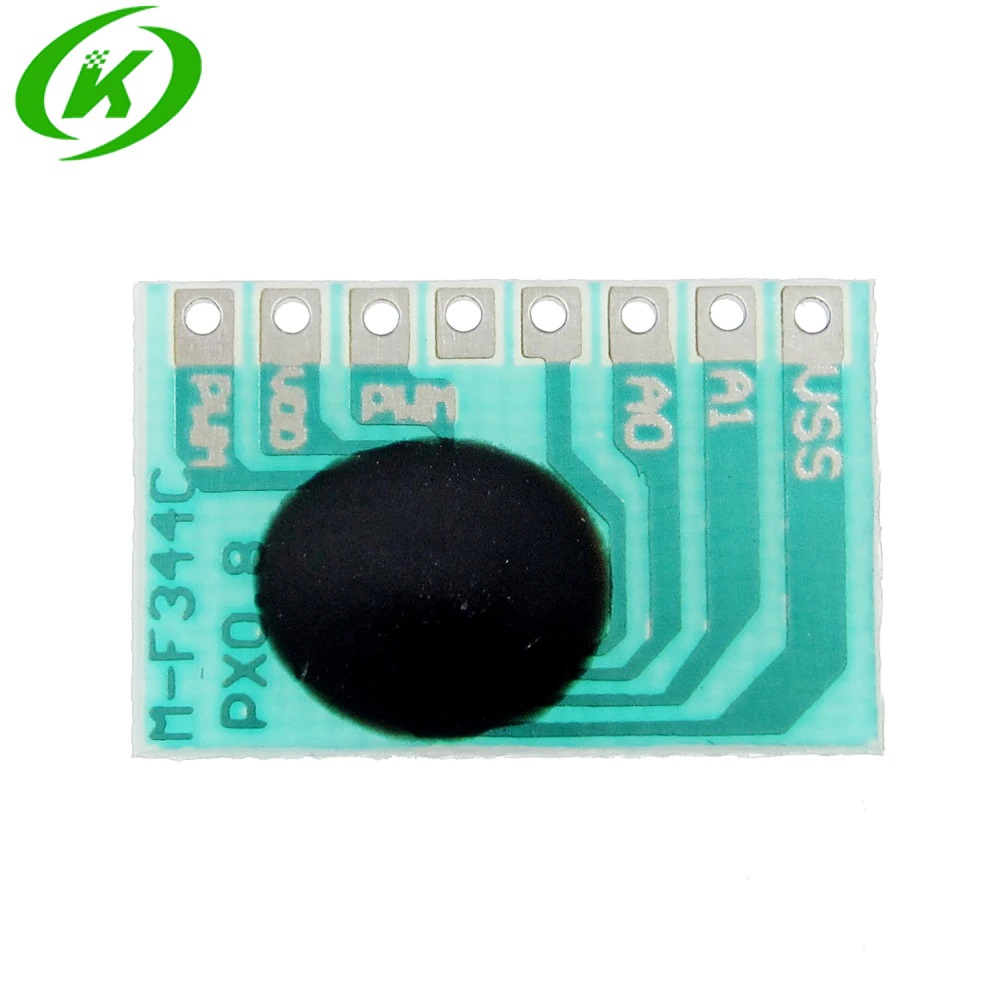 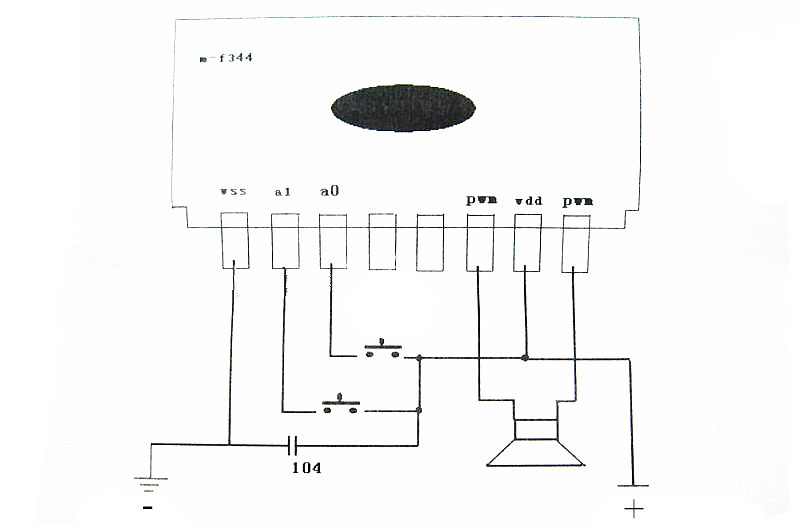 Next one I tried a more interesting multi-sound alarm module, sold as “Alarm Module 4 Kind of Sound” and it really has 4 different sounds with a PCB code “CK9561”, but the sounds are a little faint, you might need a small amplifier for this. Requires 3V to work. Is sold in bulk of 10 pieces for €0.67.
As for soldering – again, throw on some components and let it go. Requires 3V to run, resistor controls the speed and pitch and 220Kohm resistor is best to start with.
Here I also added a 104 cap just because and the first schematic is for a bit different IC, for my version I had to connect one terminal of the speaker to the base lead of a transistor. 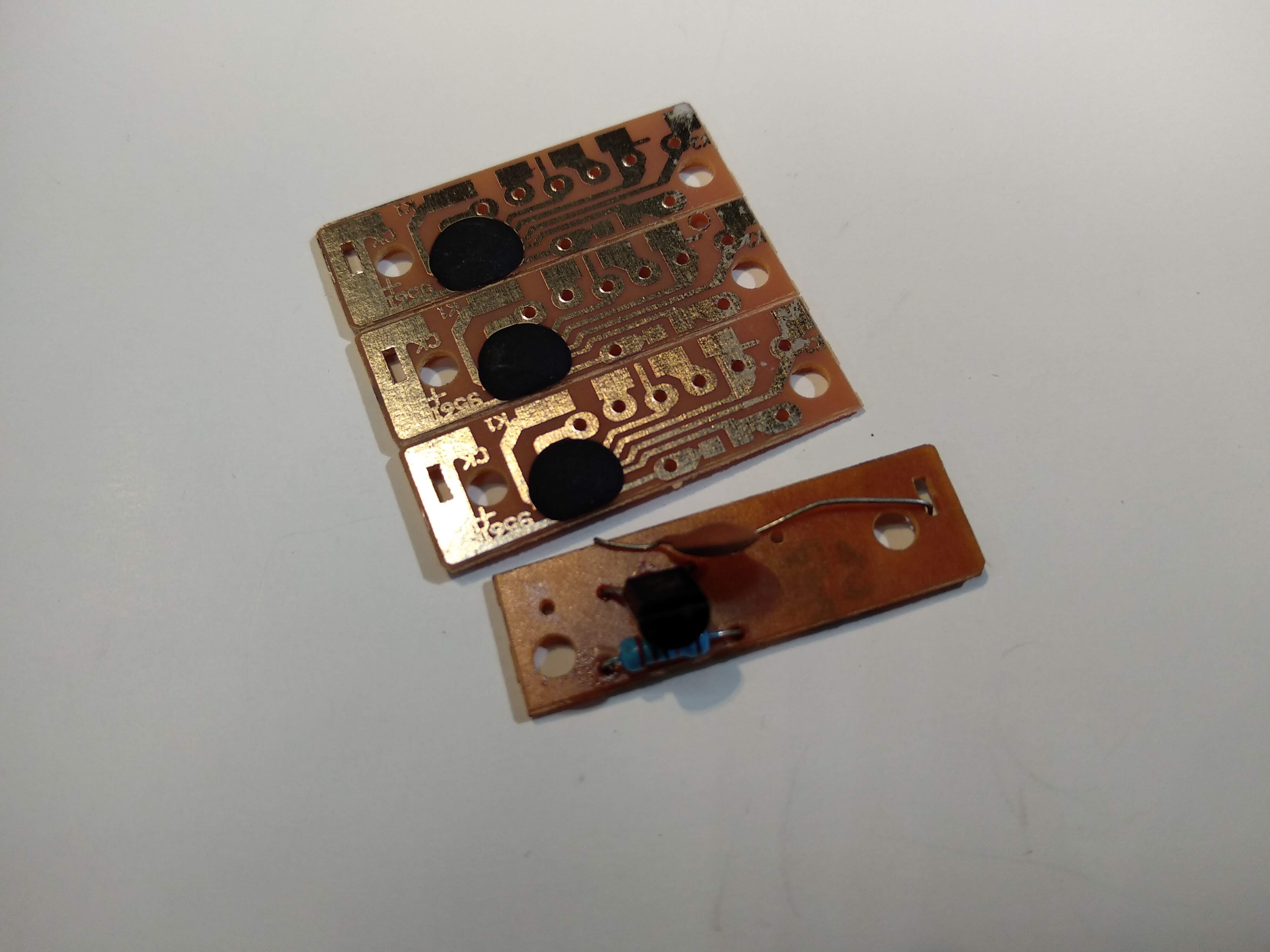 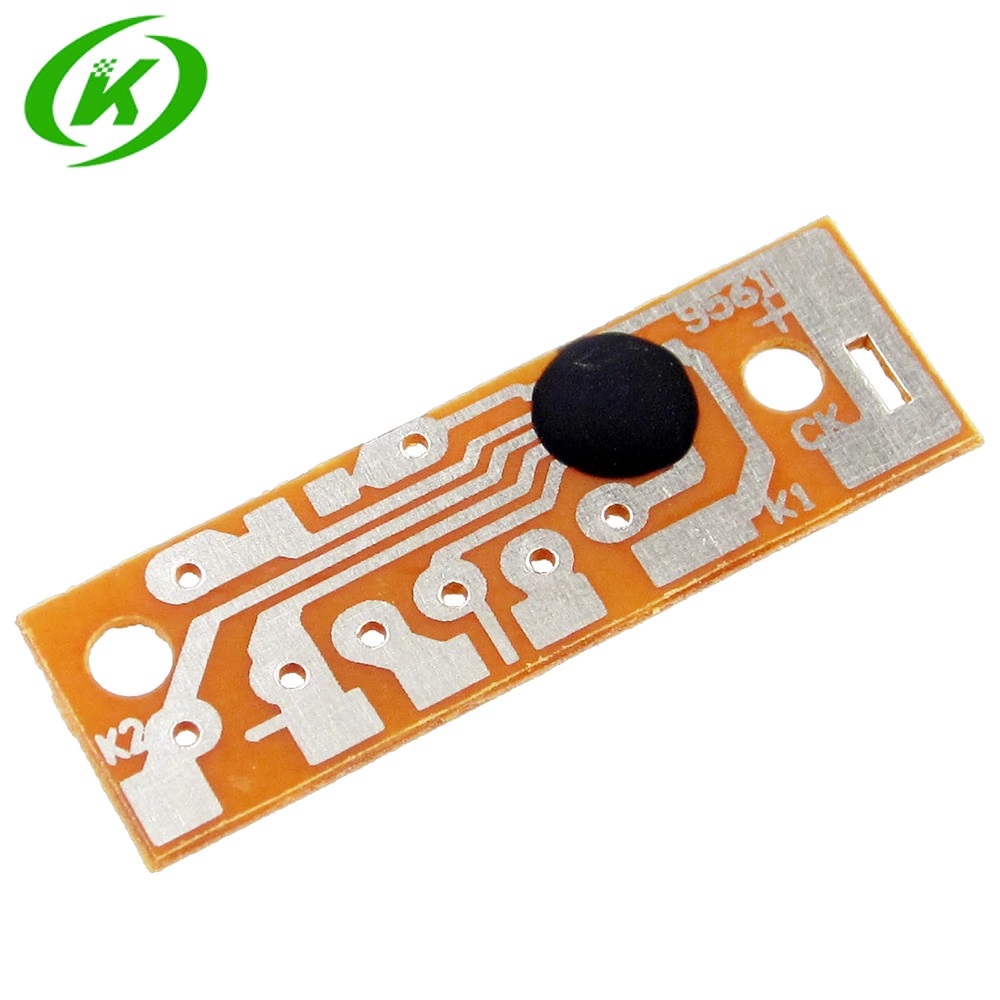 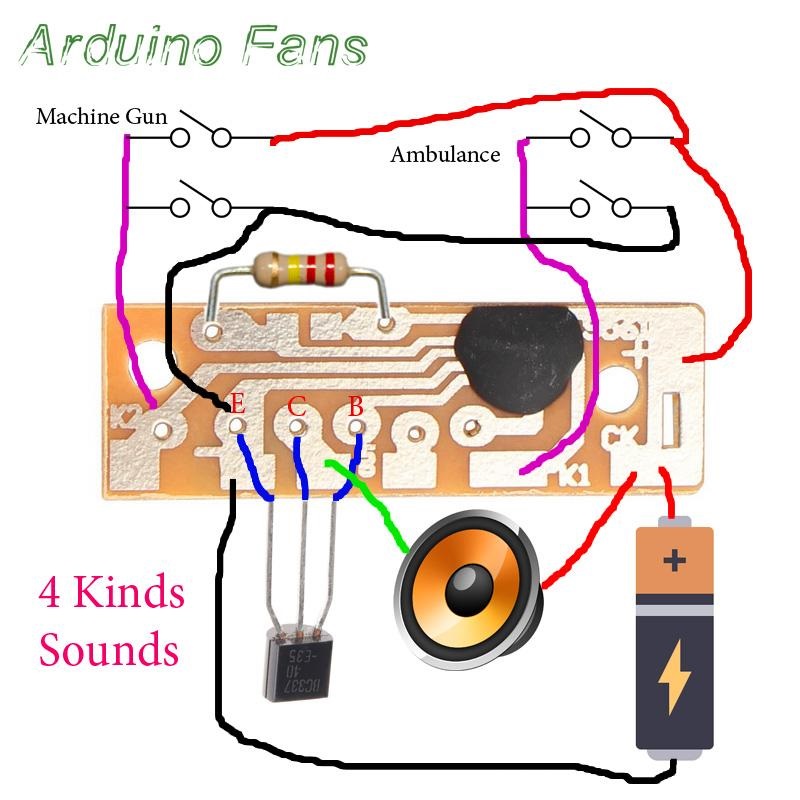 And the very last chip I tried lets you record your own sound on it. Very simple to use and it even works! To record, hold and press one button, to play press another button. It requires no components to be added apart from buttons, microphone and a speaker. Runs off 3V and is sold €0.60 a piece. Also has a PCB code “LXB18” on it.
Though while recording a sound, the microphone pics up LOTSA static, you might need to use a bit more sensitive microphone and use a potentiometer to control the input signal level. I only had the one that comes with very cheap headphones.
In the video, you can hear the message I recorded which is me counting from one to ten in Lithuanian language. 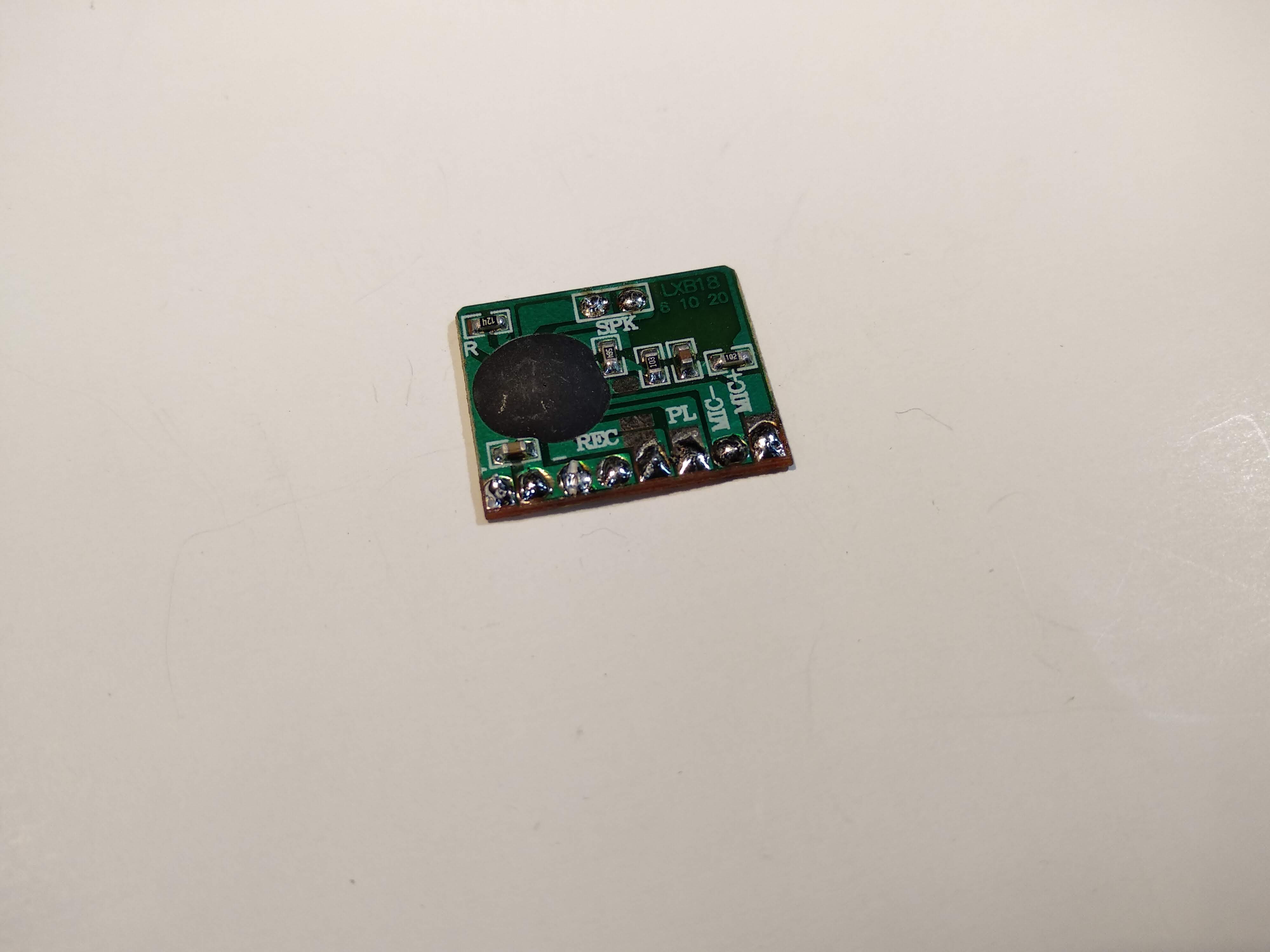 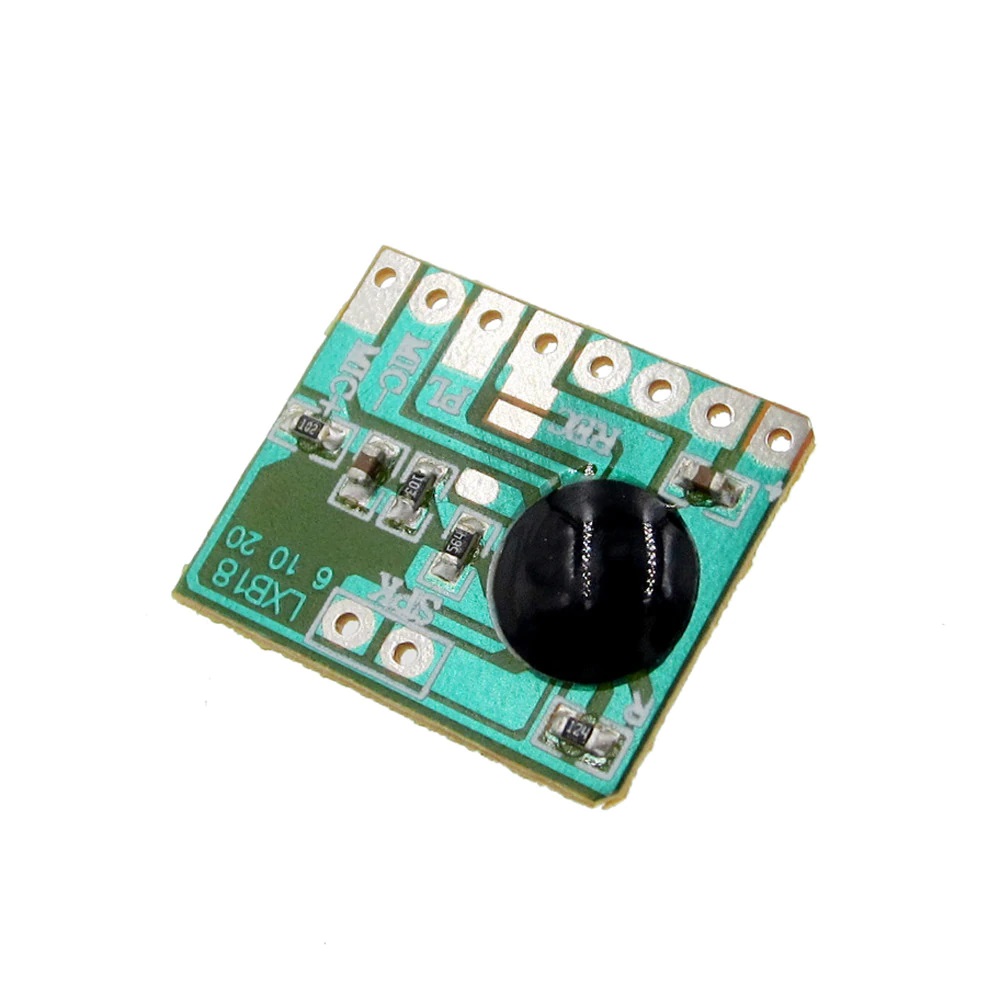 These are all very simple and interesting ICs and I guess all of them have some sort of legit use-case, even the buddhist one. The alarm ones might have a use in scale modeling though.