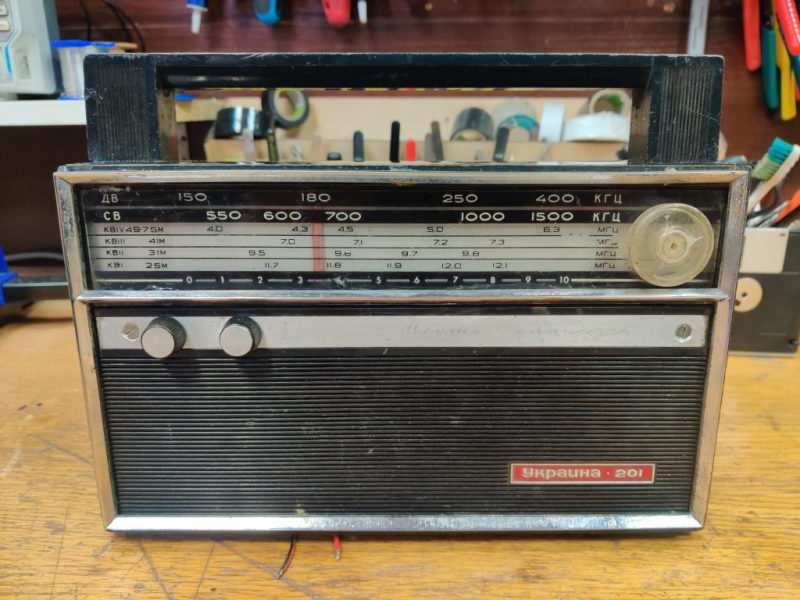 Some time ago I added bluetooth to a VEF radio (although all of internals were replaced) just for fun (because I didn’t want to throw out a good looking radio :P ) and since then I was using it as a portable speaker quite a lot and people seem to love it. Every time they see it playing it always puts a smile on their face :) and the sound quality turned out to be very good, so it was worth it.

That brings us to this project – recently I found these two radios in an old attic, both with different names and decided to do the same thing and give it to friends as a gift. But the ones I found were a bit abused as they look beat up, scratched and broken in some places. 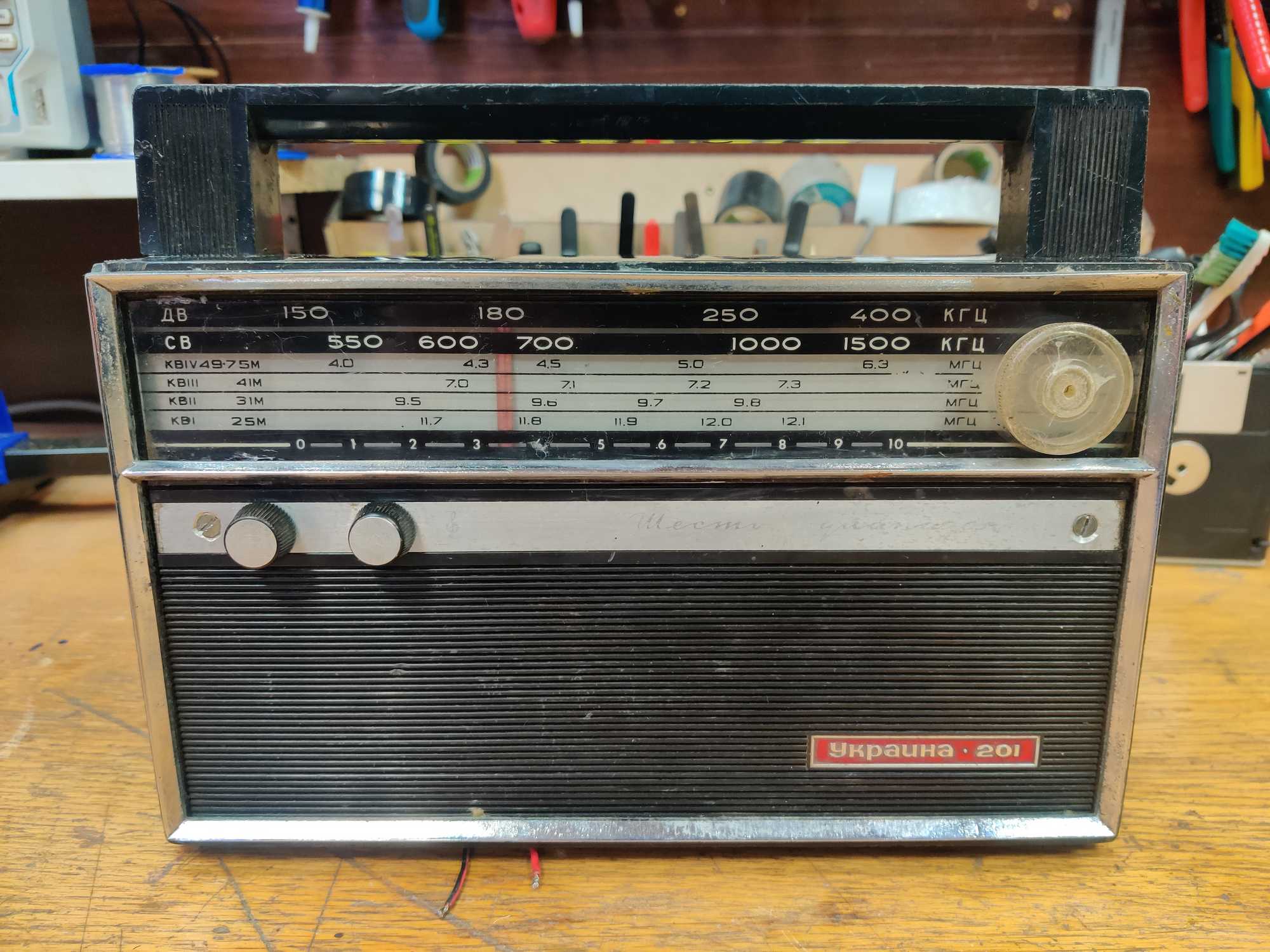 About the radio:
It’s been manufactured since 1971 for a few years I guess, in Kiev, Ukraine, as the name suggests. There were a few different variants of the same model.
More information: https://www.radiomuseum.org/r/kijevr_ukraina_201.html

Right away I opened it up to see what we have inside and how could I modify it. I was relieved to see that it has a great construction for easy modification and plenty of space after I threw out all the components. The middle bracket can be taken out and it’s where everything will be put on. 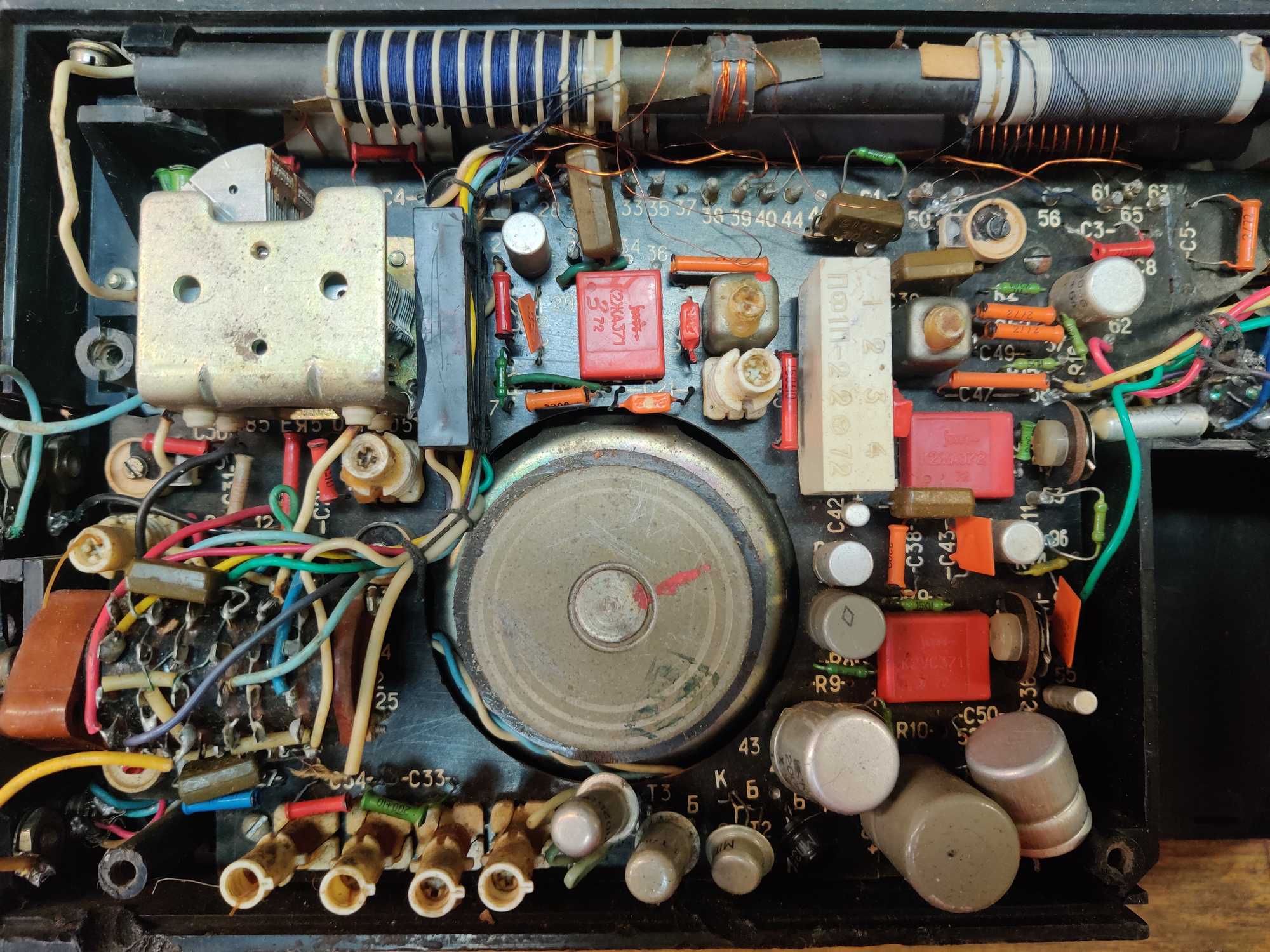 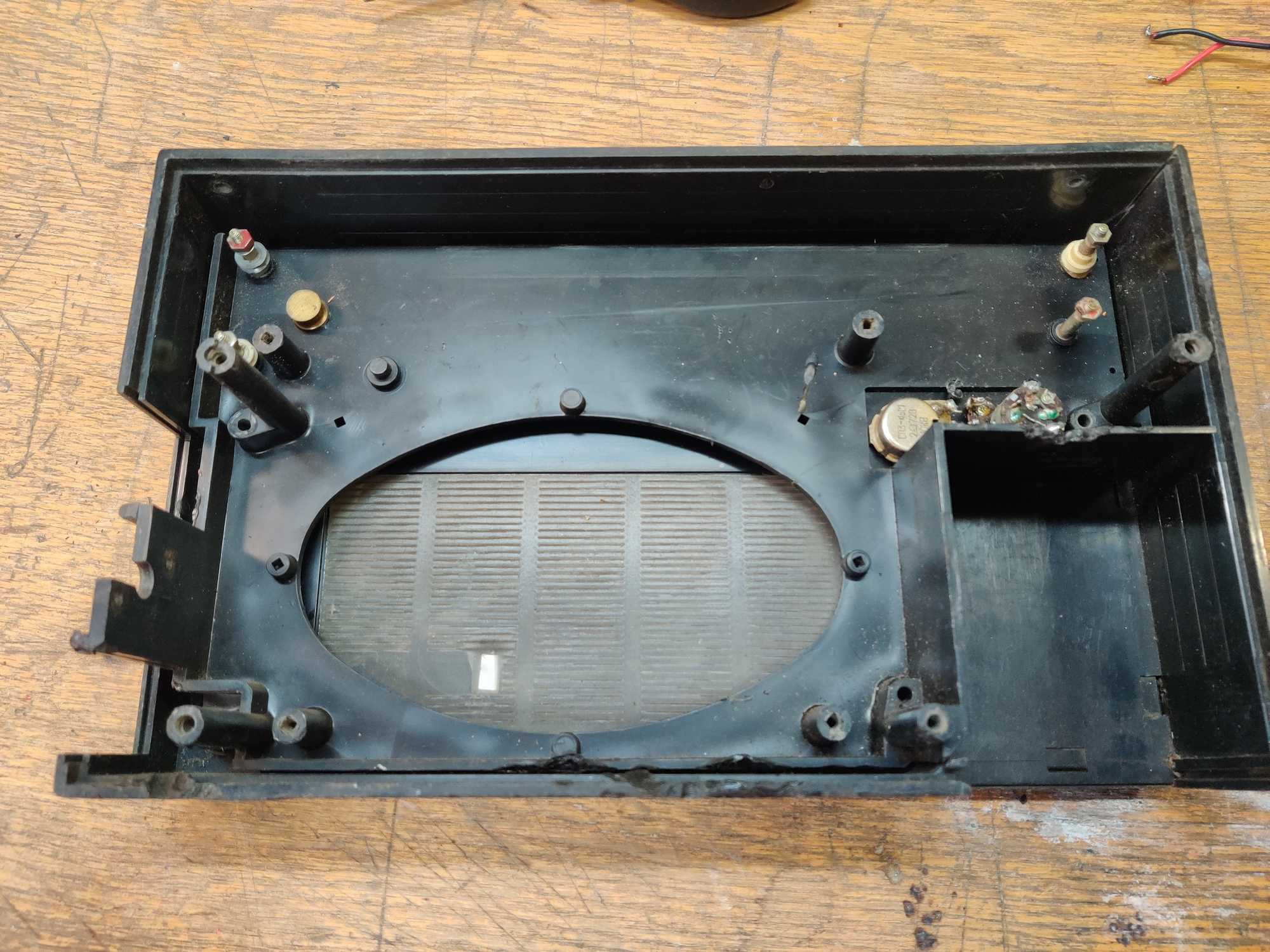 Like with the VEF, I wanted to have all the buttons and knobs working (but not doing anything) but when I removed electronics, a side potentiometer was thrown out as well because it was soldered to the board but I found a replacement Russian one in my drawer of potentiometers. Had to shorten the handle a bit though. 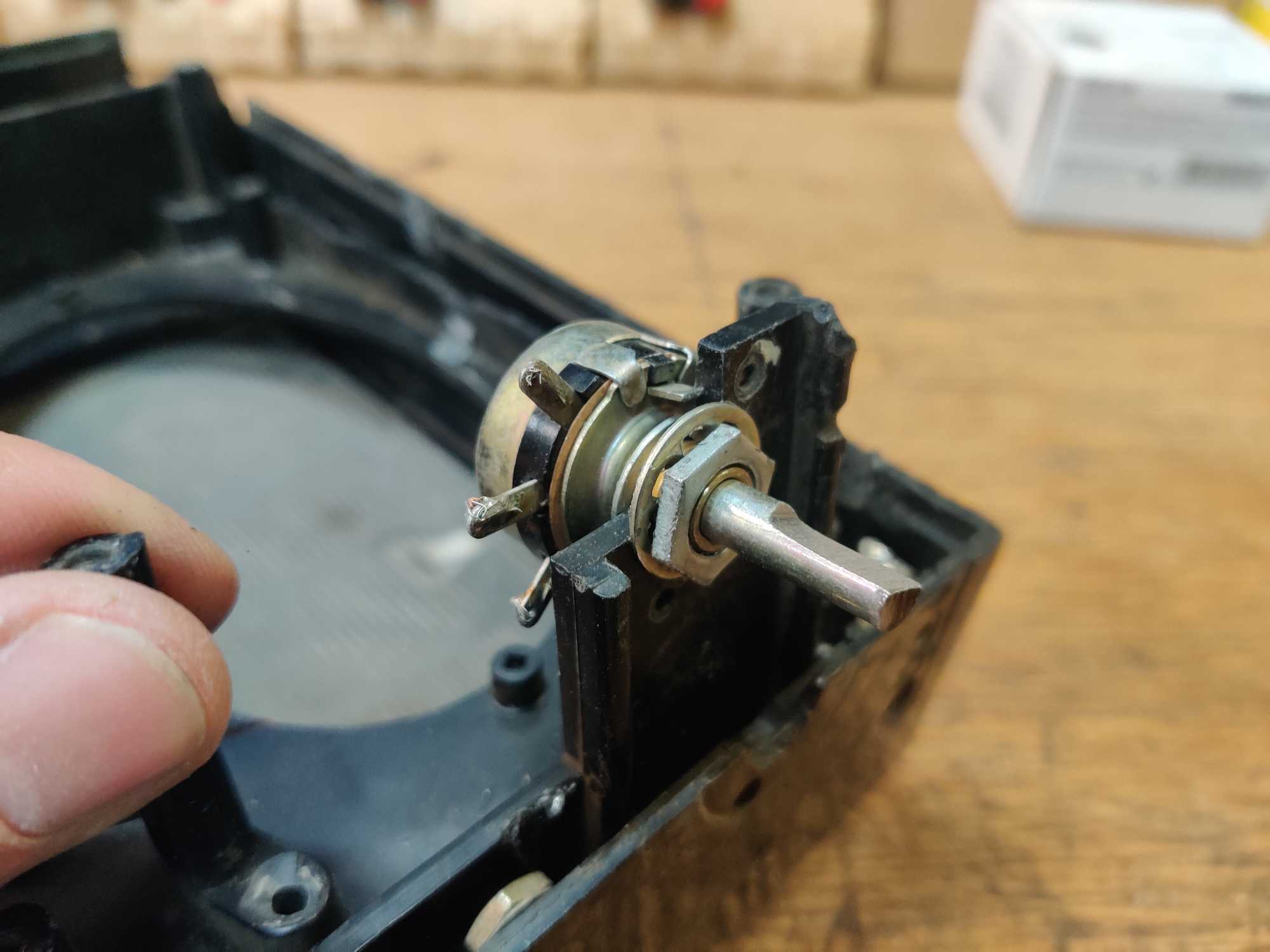 I bought an alternative 30W speaker for 13eur that has good audio quality and it fit just right in there. Had to make a bracket for it out of plywood. 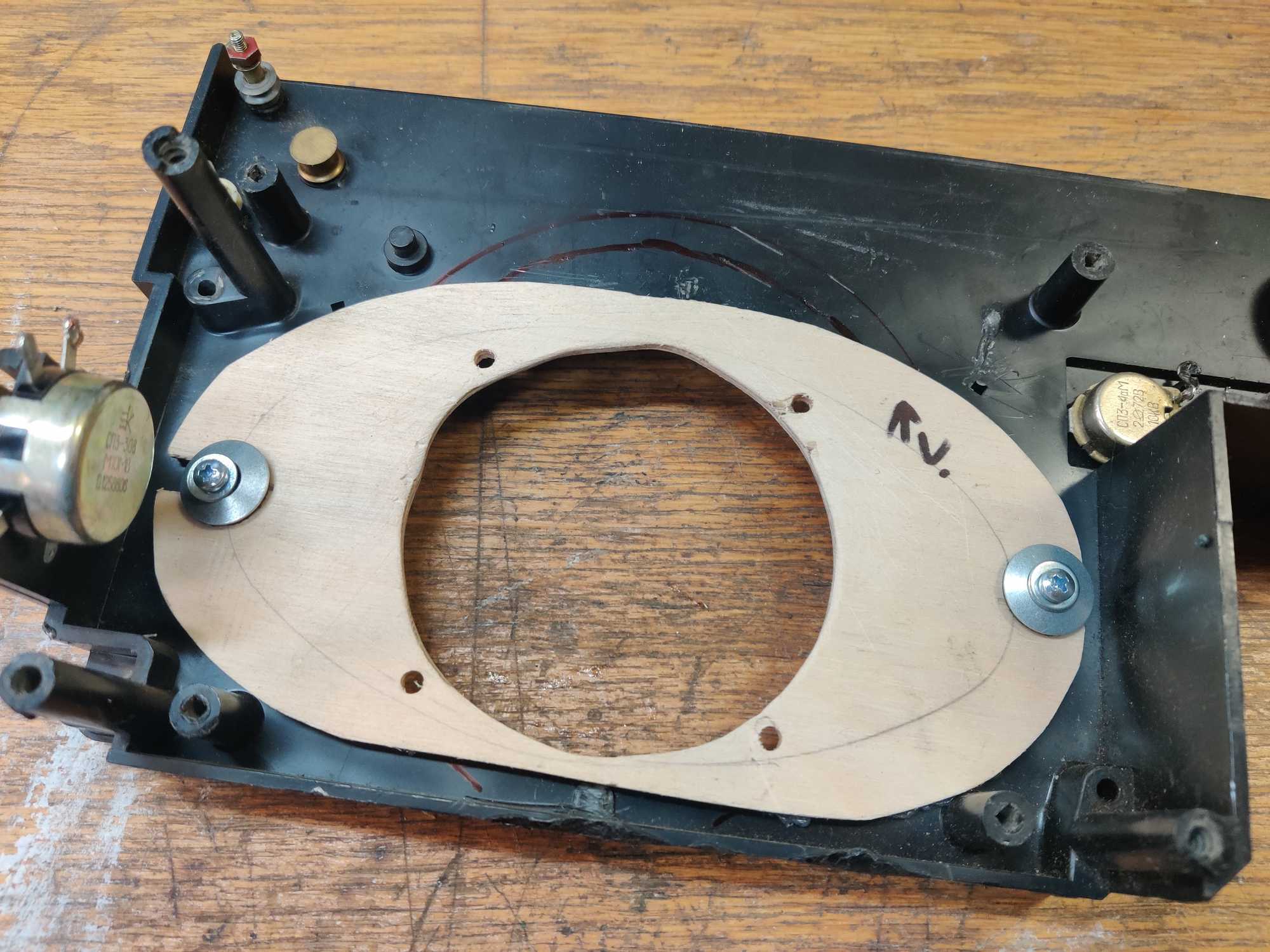 And then also made the frequency dial work by connecting the pulleys with a string. Thankfully I made the same thing with a VEF so it was easy to figure out how to route the string this time. 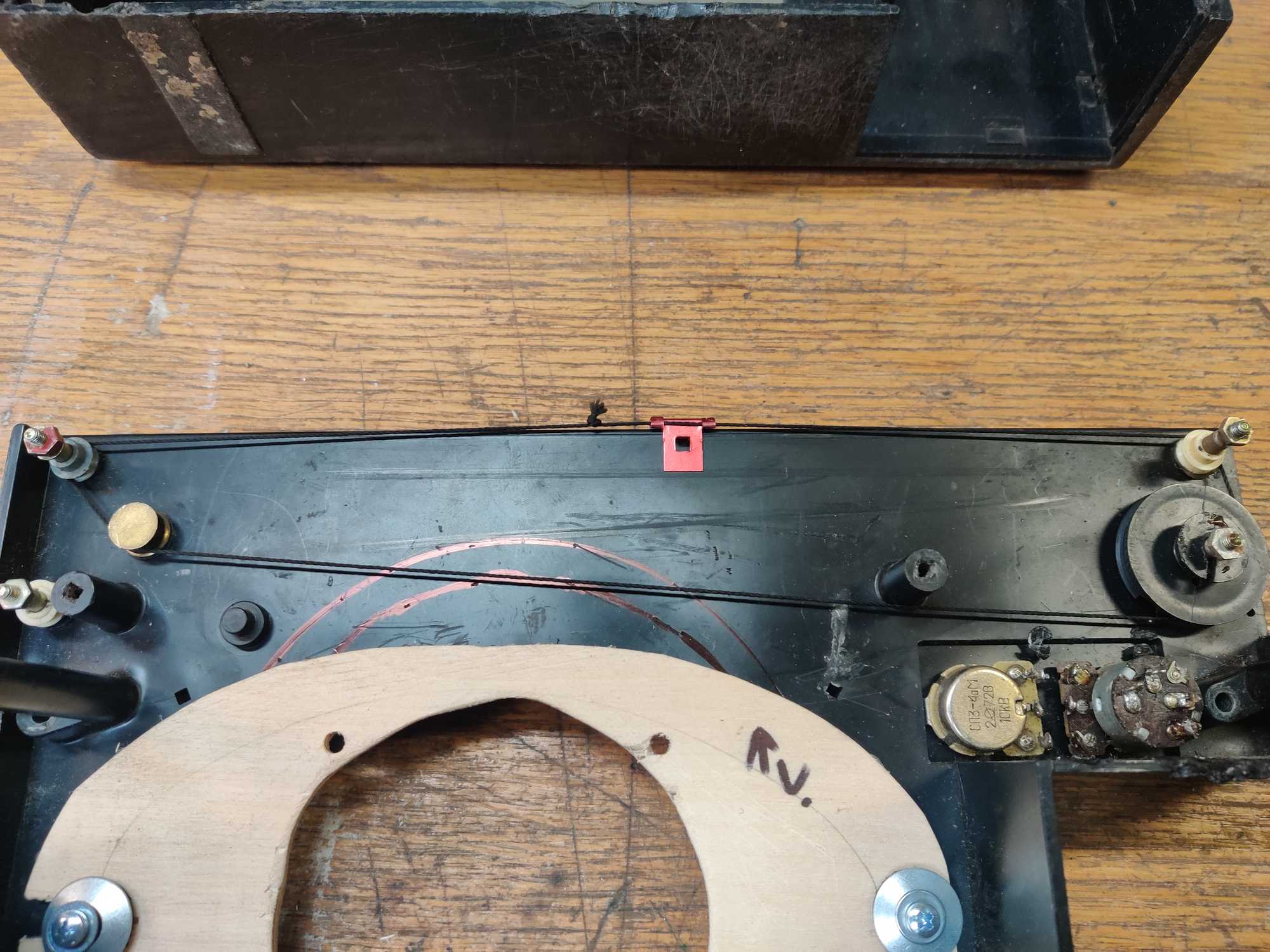 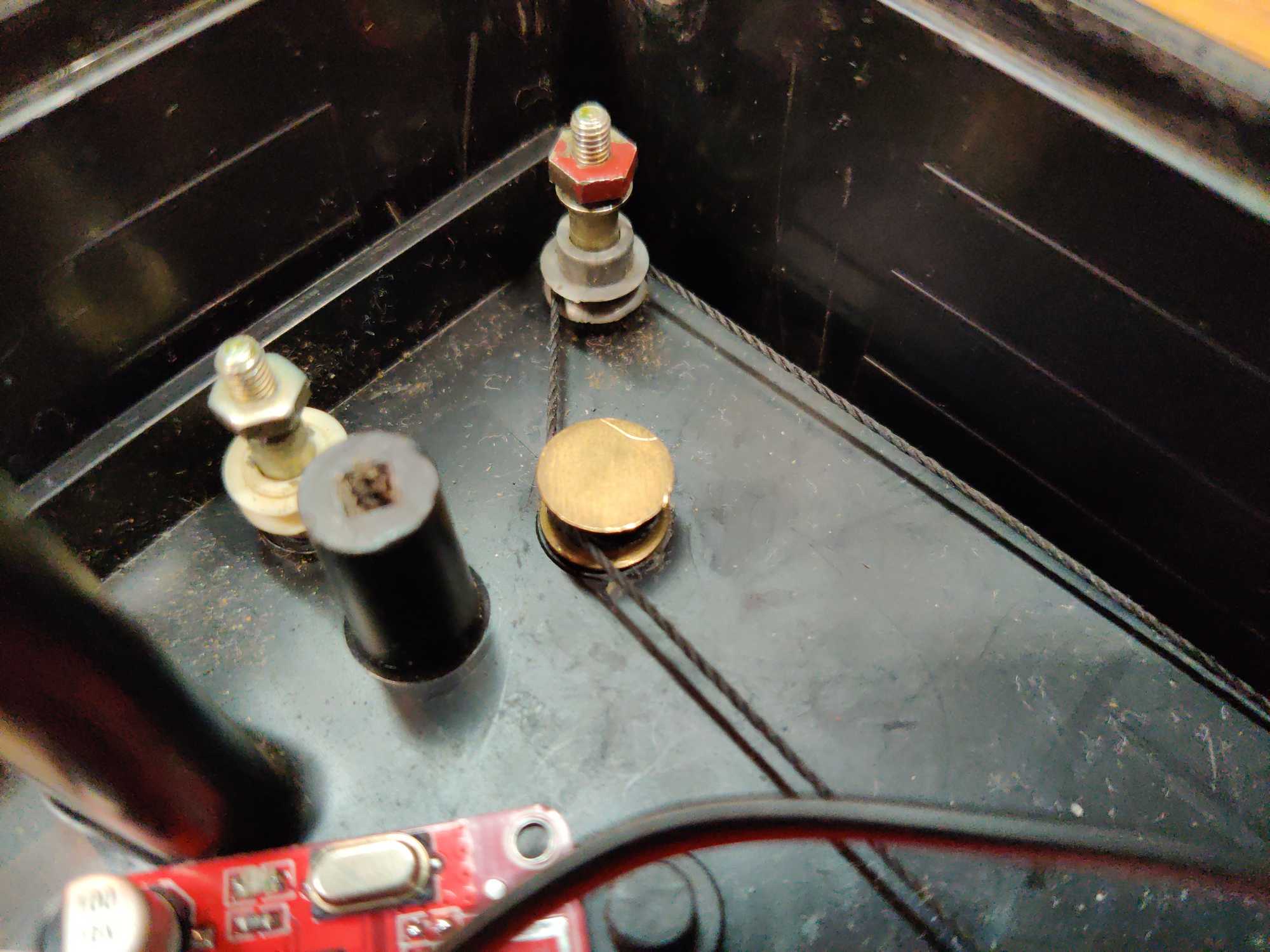 Putting all the main components in I planned out the layout how I’d put everything inside.
Those main components are simply a bluetooth audio module, a 12v mono audio amplifier and a buck converter (12v to 5v). 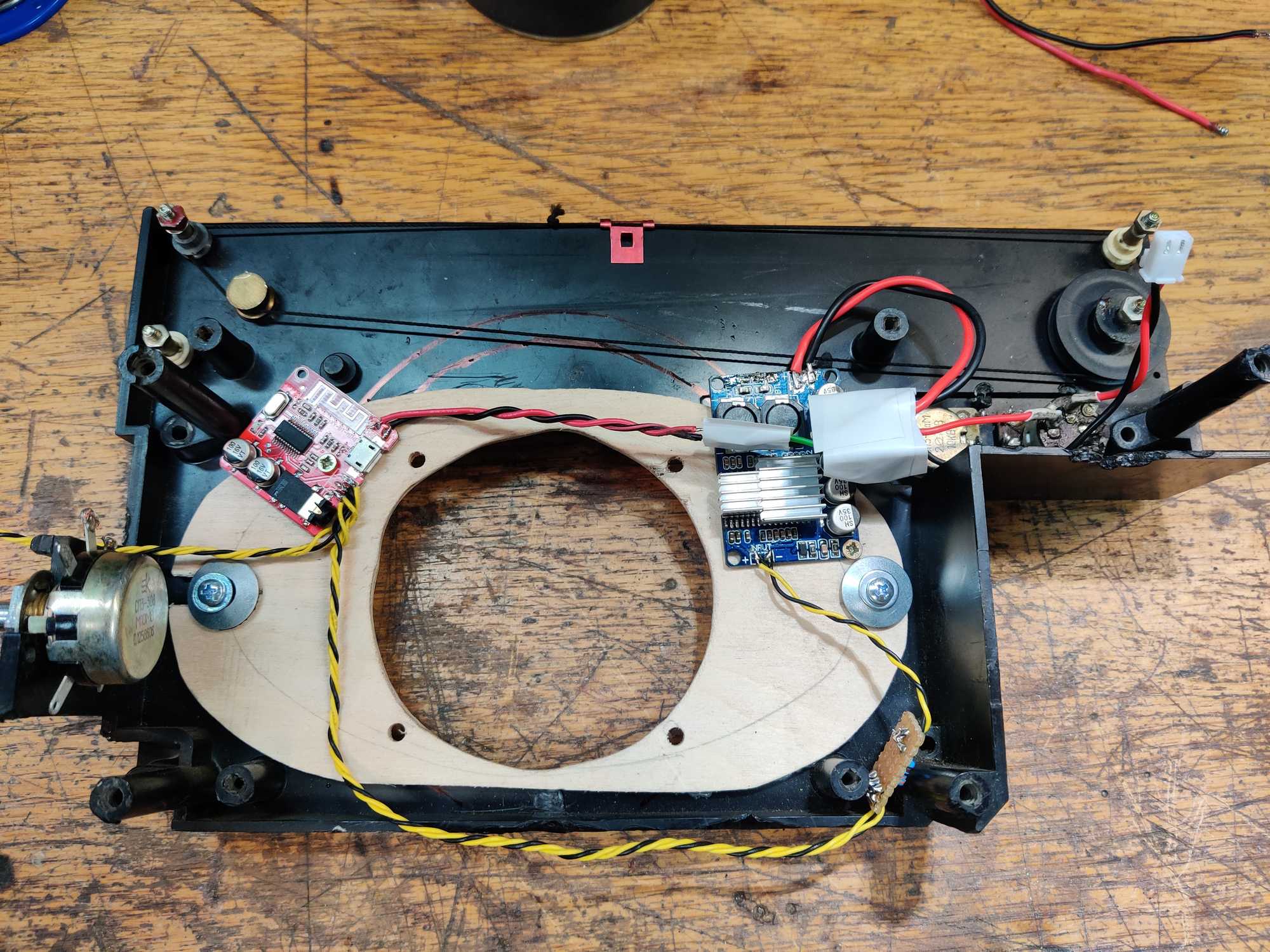 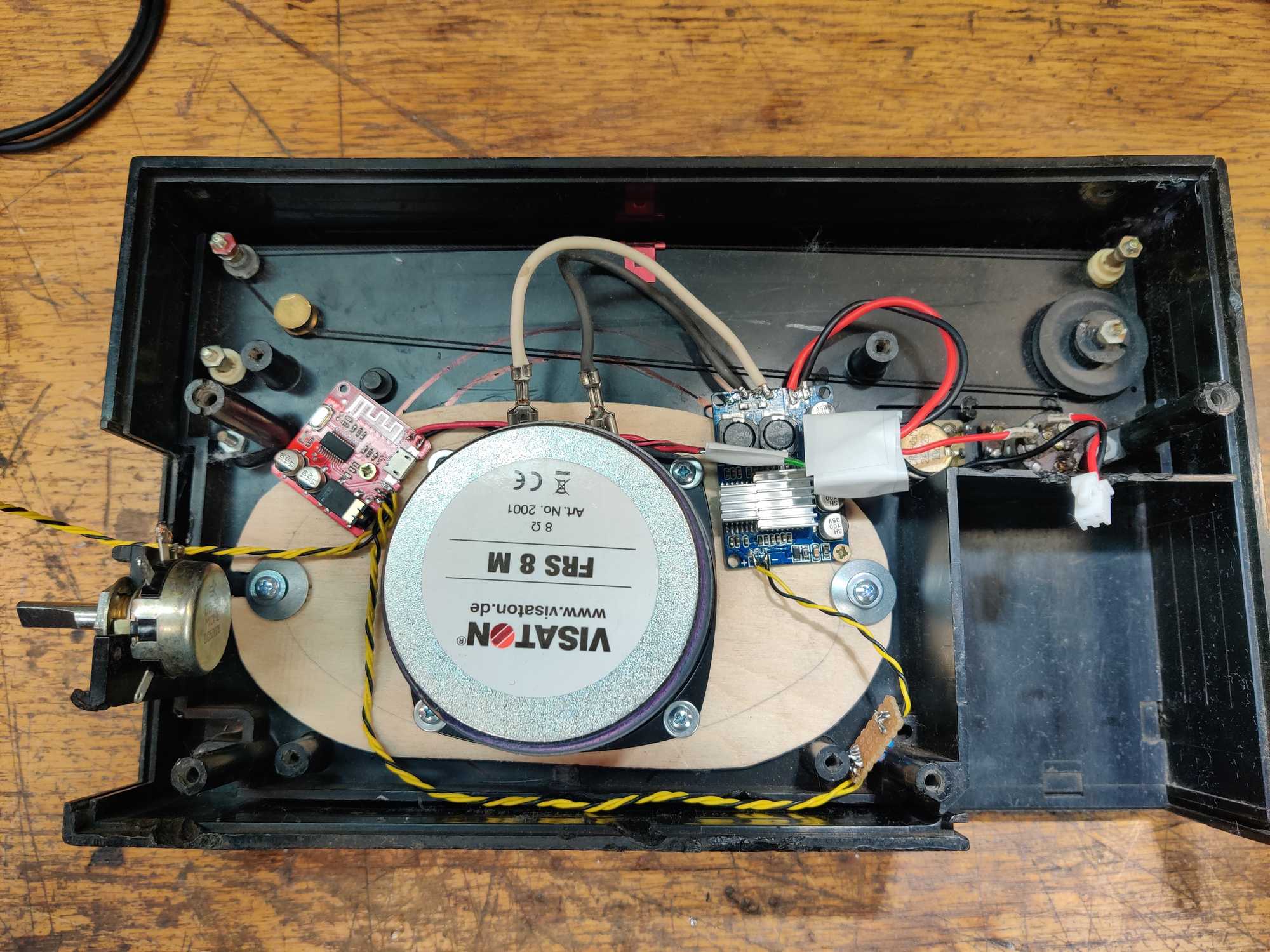 After putting those components inside, I had to make a few modules myself.
Because even if the speaker is 30W and it sounds a lot, it starts to growl and distort audio a lot if you crank up your phone volume to the maximum. Obviously you want to avoid that.
And to avoid that I measured the maximum audio level just at the point where the speaker starts to distort audio by putting a potentiometer between the speaker and bluetooth. Then I measured the resistance set and used those values of resistors on a pcb to fix the peak power. 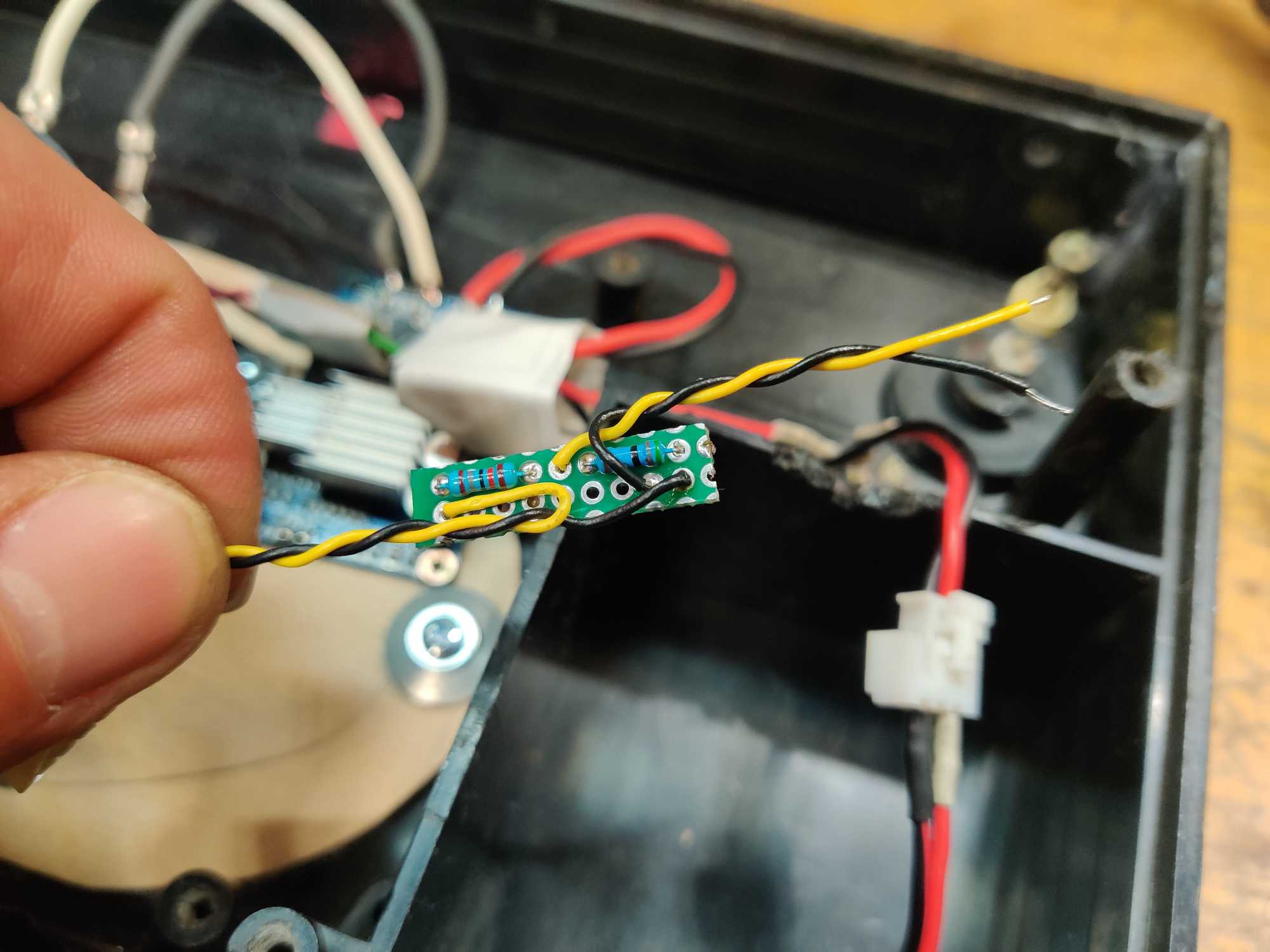 Having learned my lesson from the VEF project, I used separately the Bluetooth module and a mono amplifier. This allowed me to mix both Left and Right channels coming out of the bluetooth into one channel and serve that into the speaker.
To do that I used two 10k resistors on a pcb. 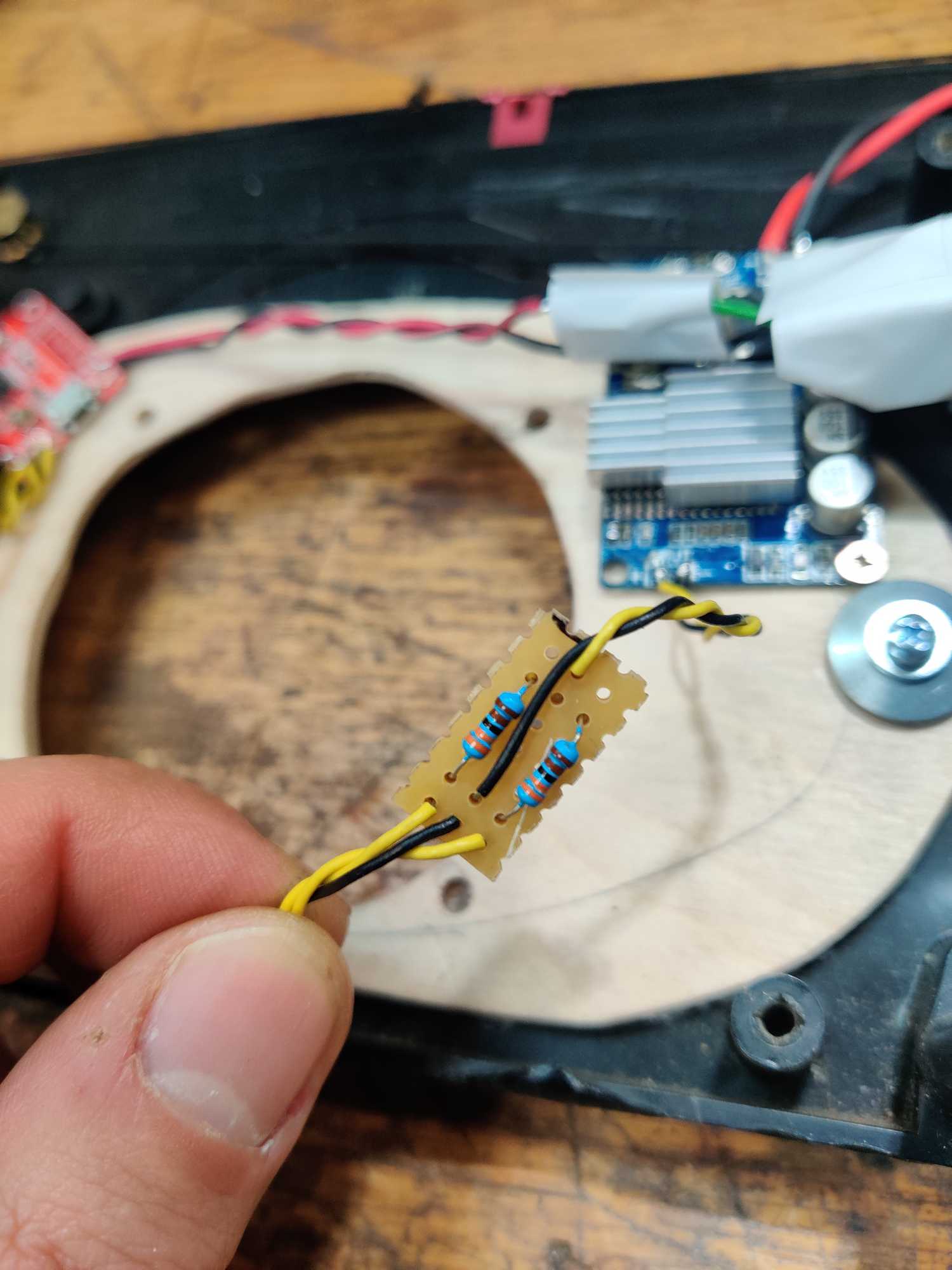 To actually turn on the radio I used the original handle which is a potentiometer with a switch, it was great for this because I also made it control the volume too! 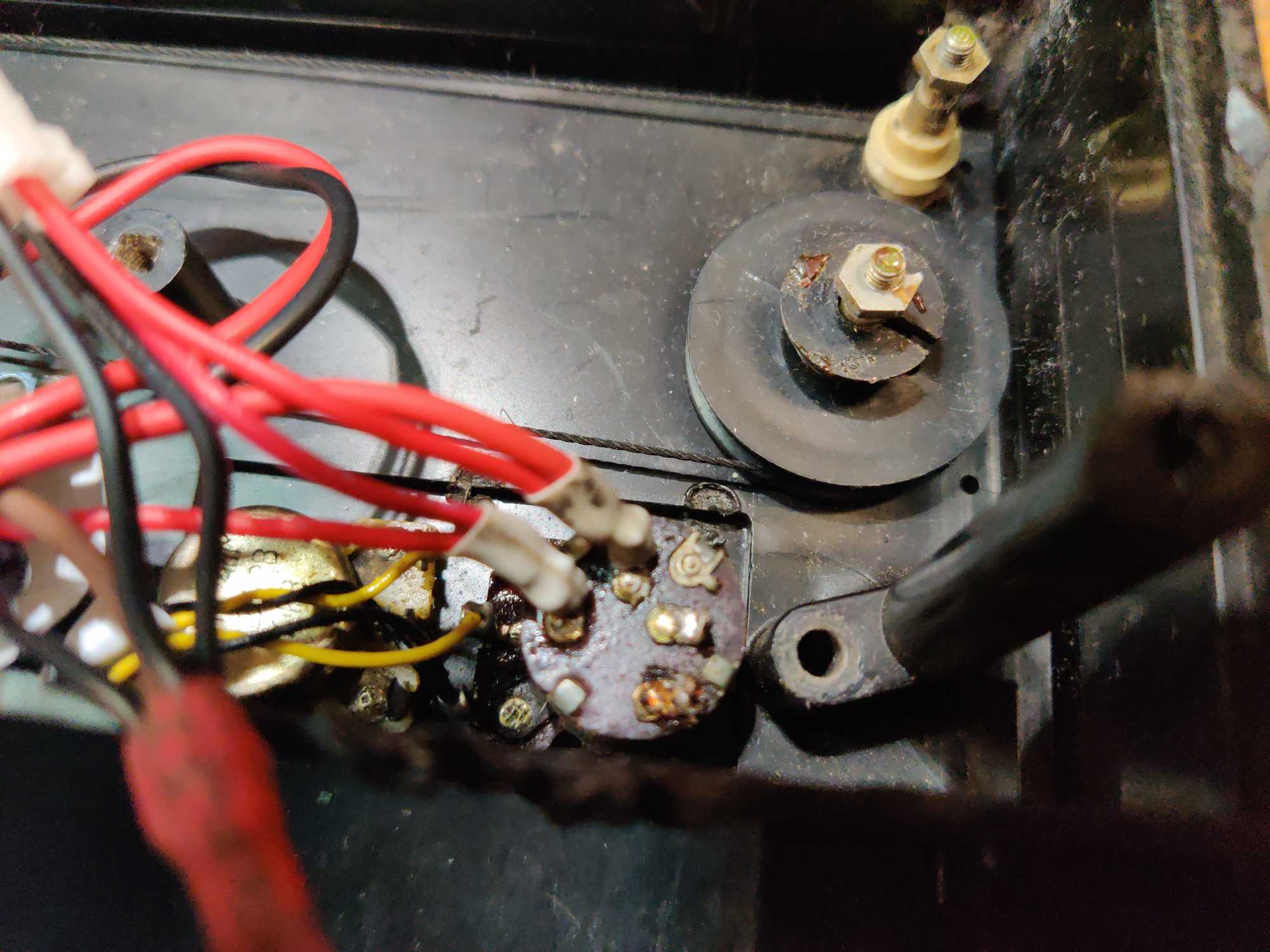 I modified the side panel to have an audio port (if you wanted to listen to your music with headphones or maybe you wanted to use it as a bluetooth player for your amplifier) and of course a battery charge port. 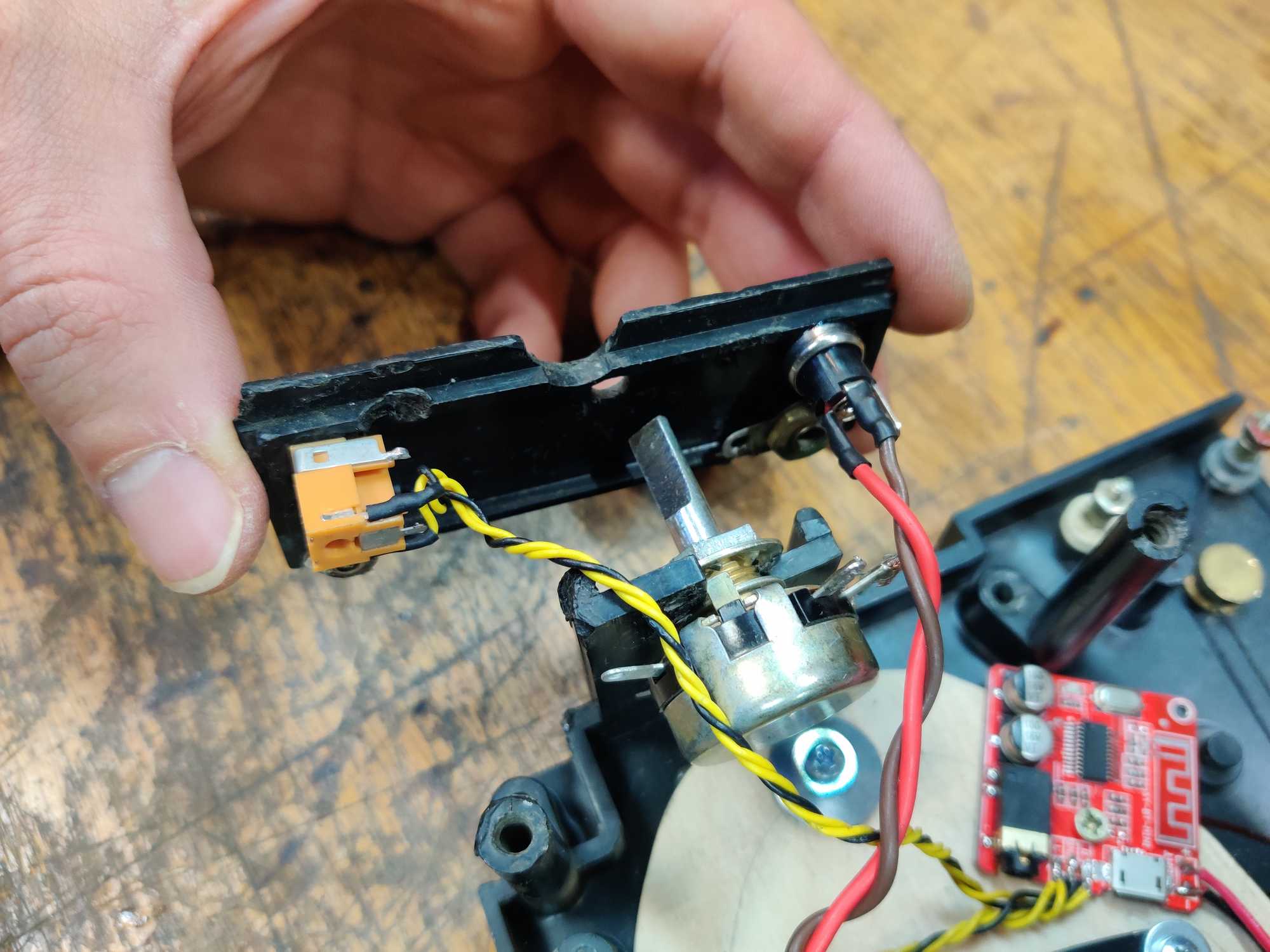 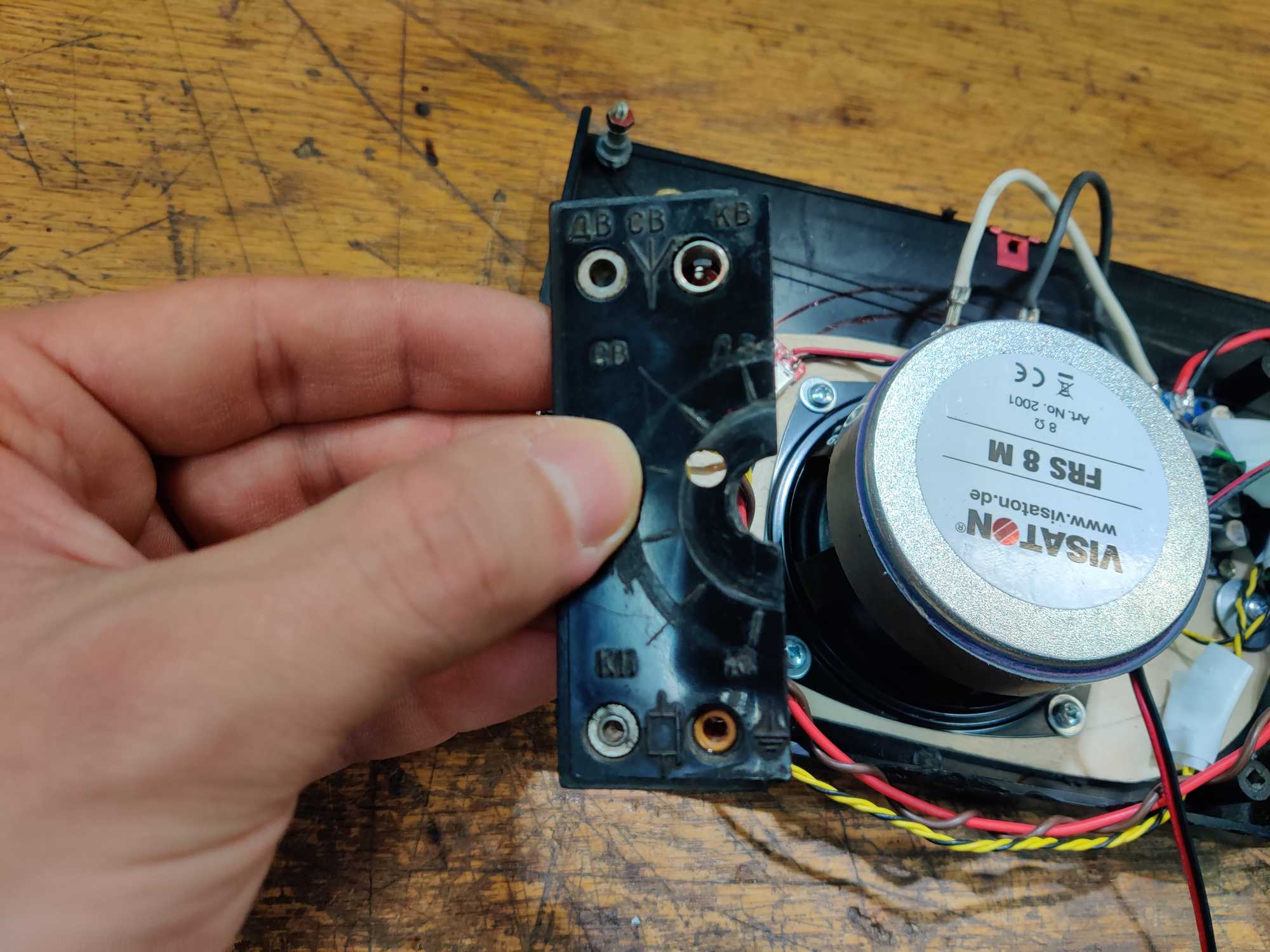 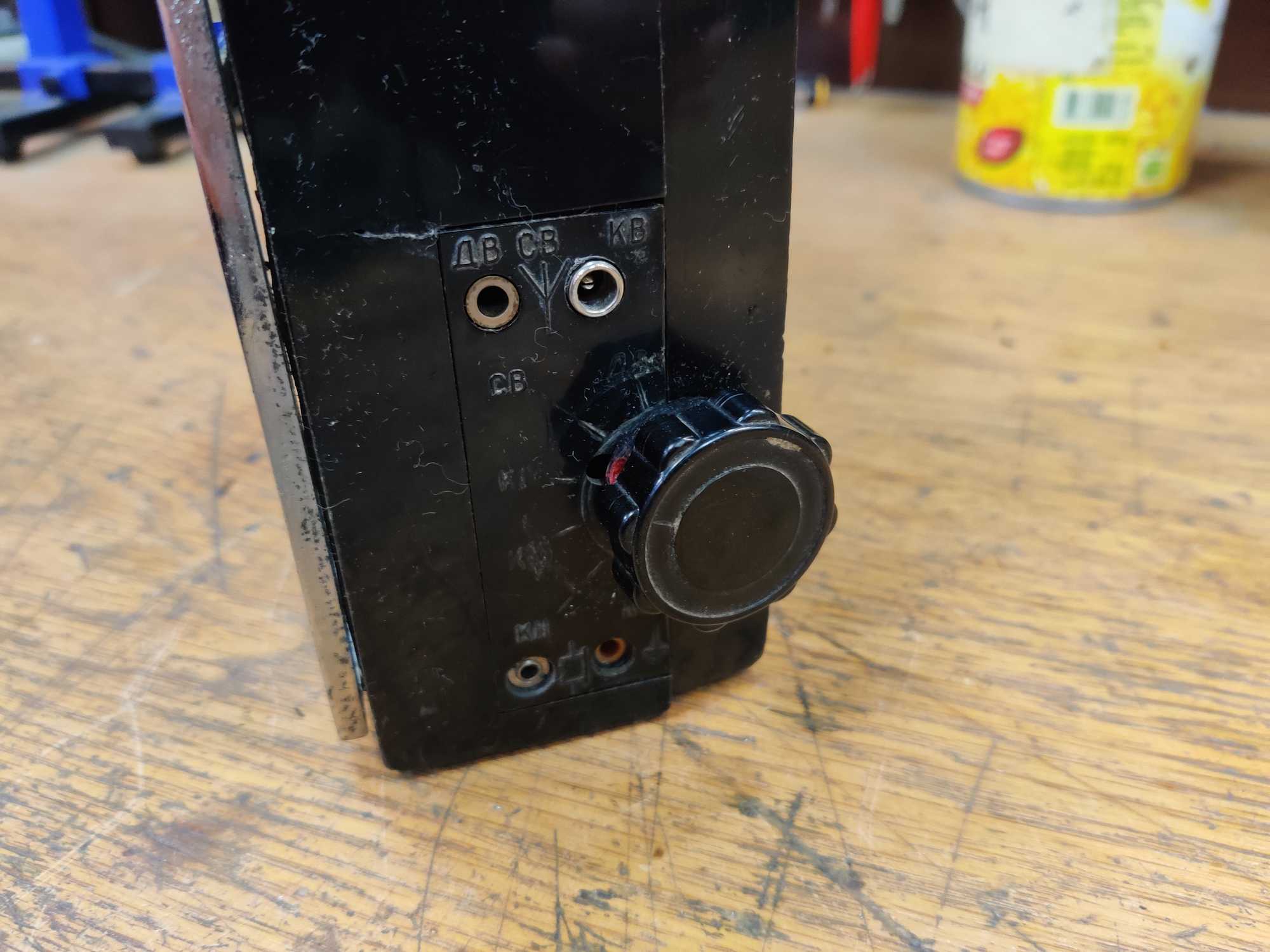 And with everything inside the radio it looks like this (also with cotton to somewhat prevent unwanted vibrations): 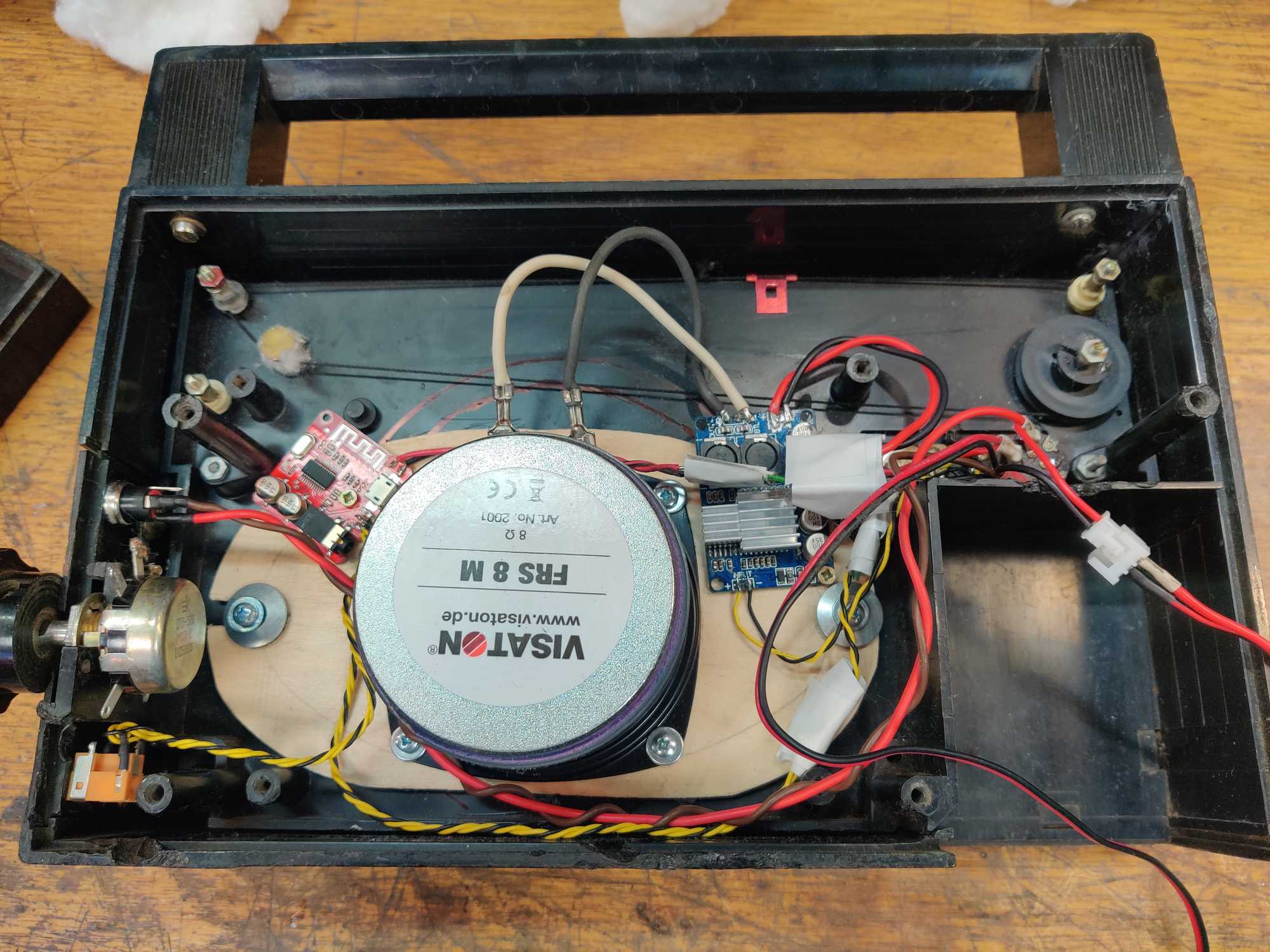 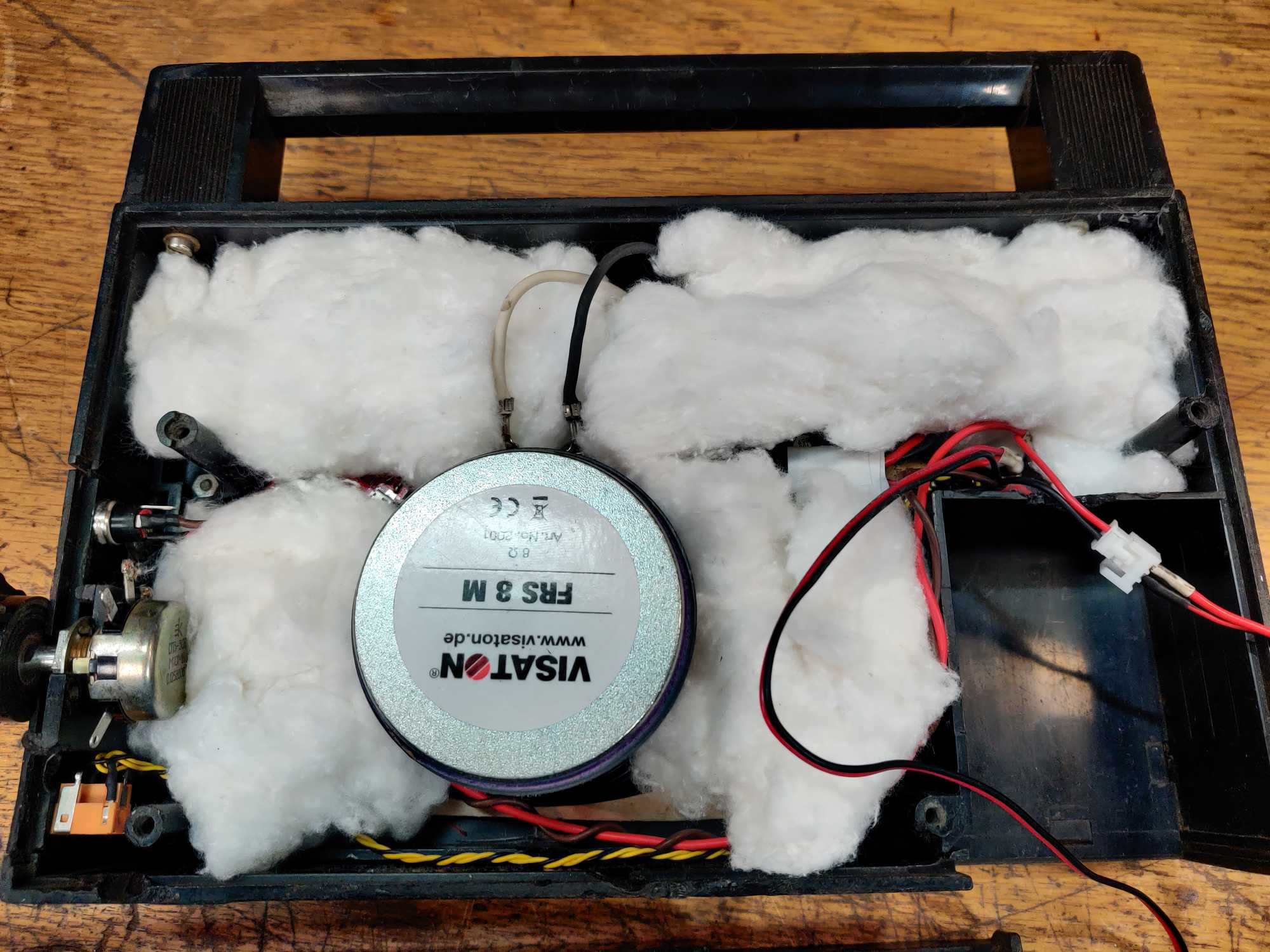 Final thing to do was to make a 12v battery for it by using 18650 LiPo cells with Nickel strips for connections and a spot-welder.
It seems that having a 2×3 LiPo cell arrangement is a perfect fit inside the original battery compartment (although needed a bit of cotton for padding).
Then to see how much battery is left I glued an indicator on the back of it and since the battery compartment cover was missing I cut one out of a copper plate and spray-painted it black. The copper plate was a perfect fit and I didn’t even need to use screws to keep it in place. 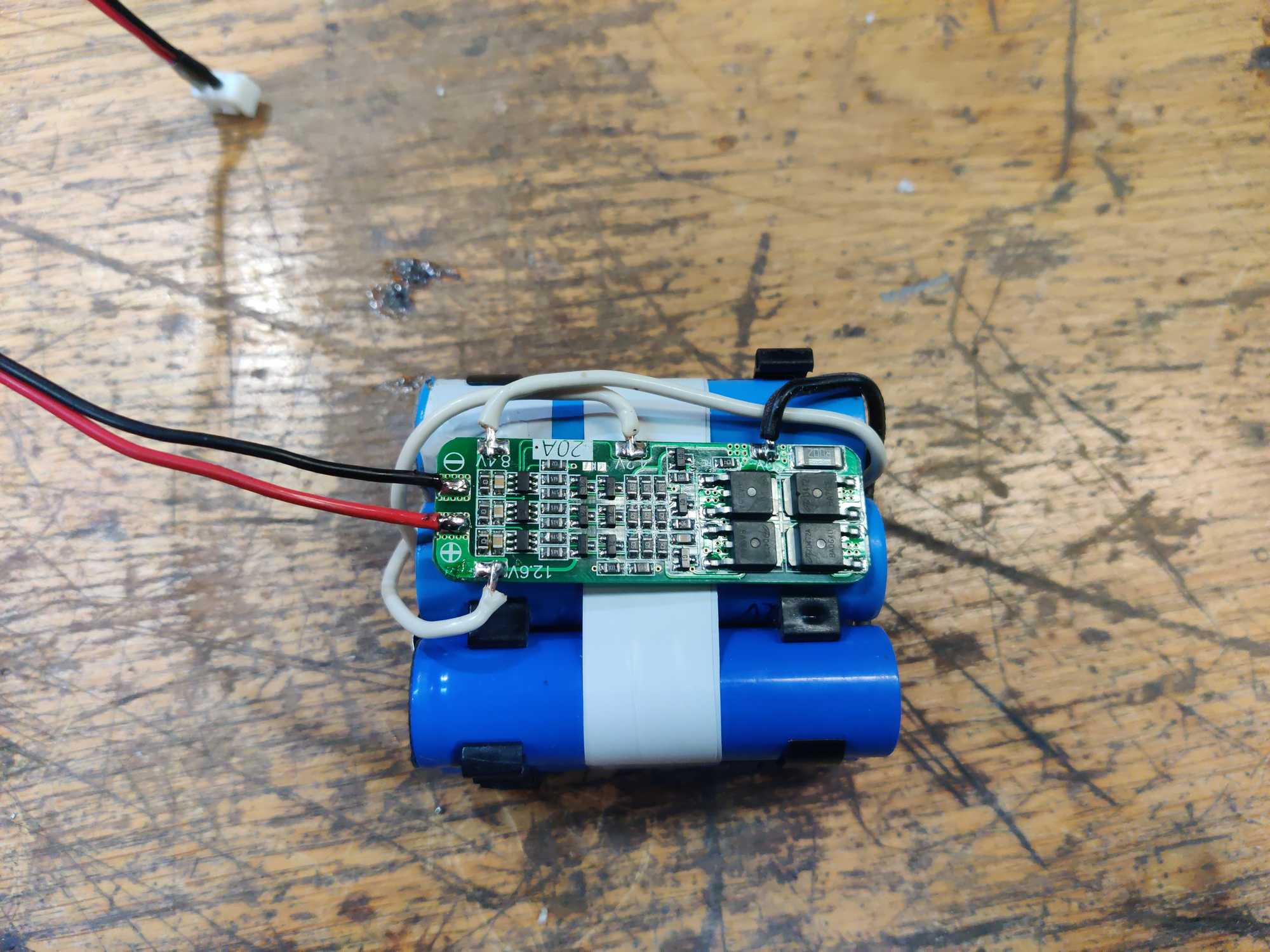 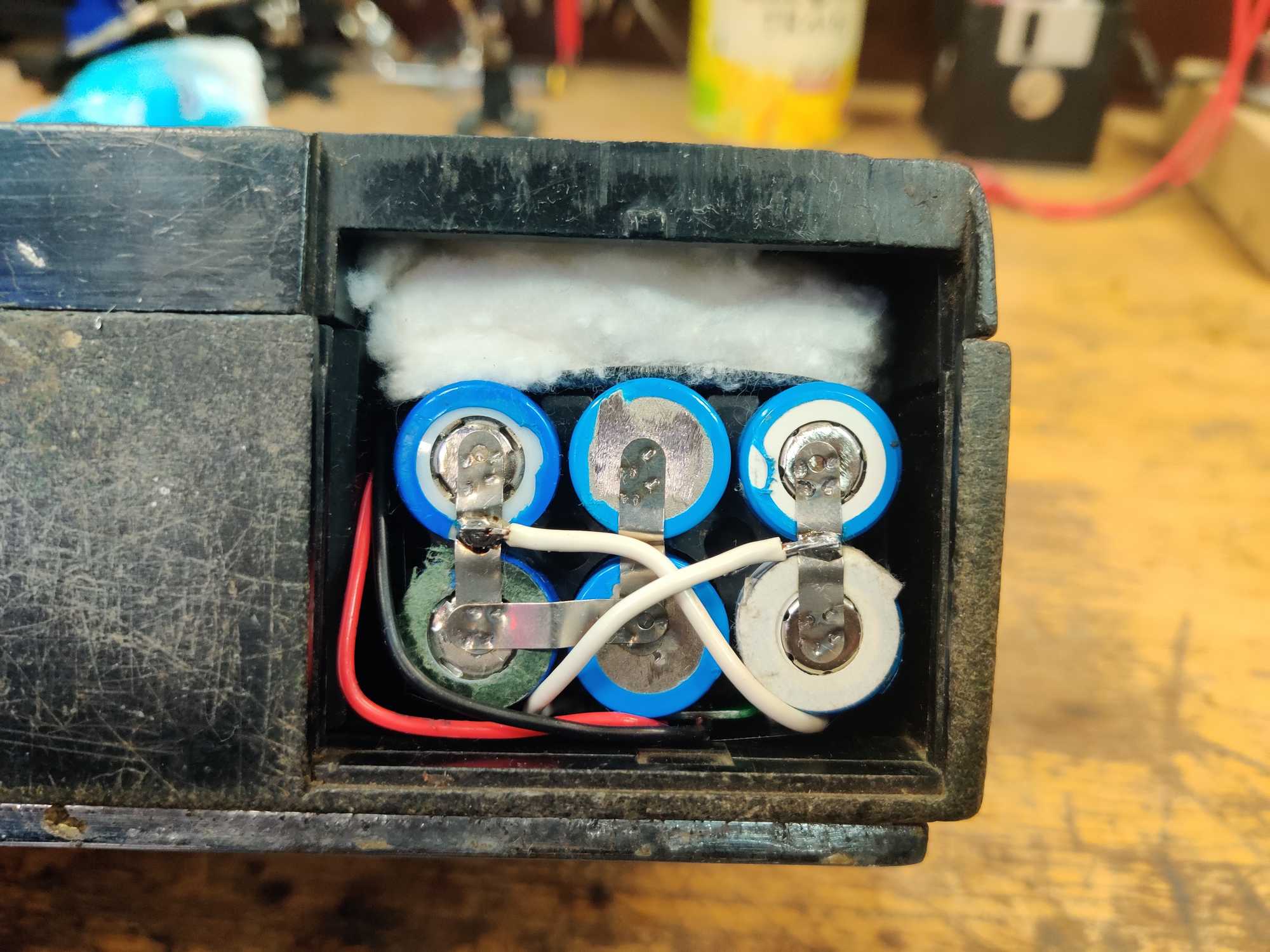 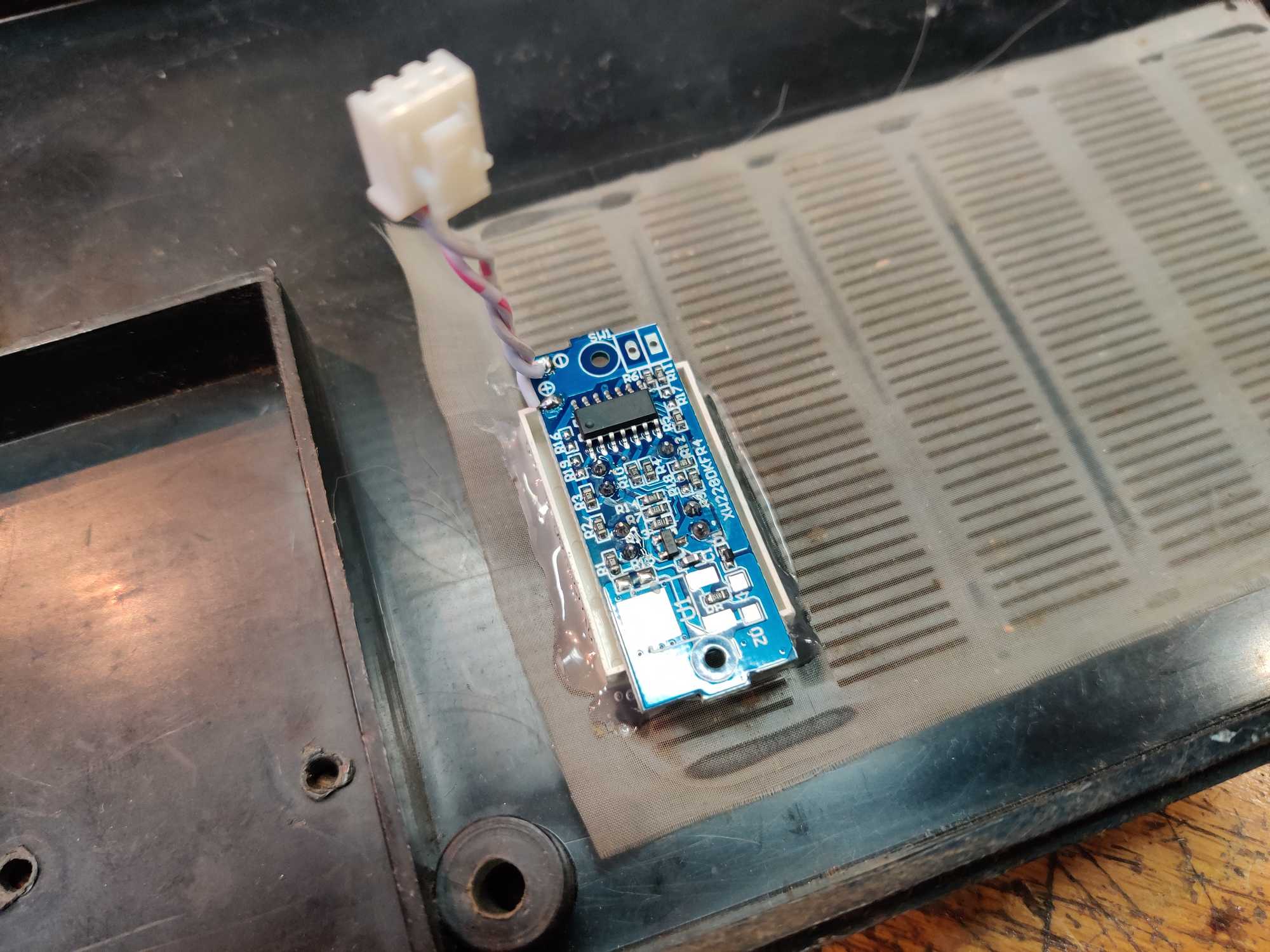 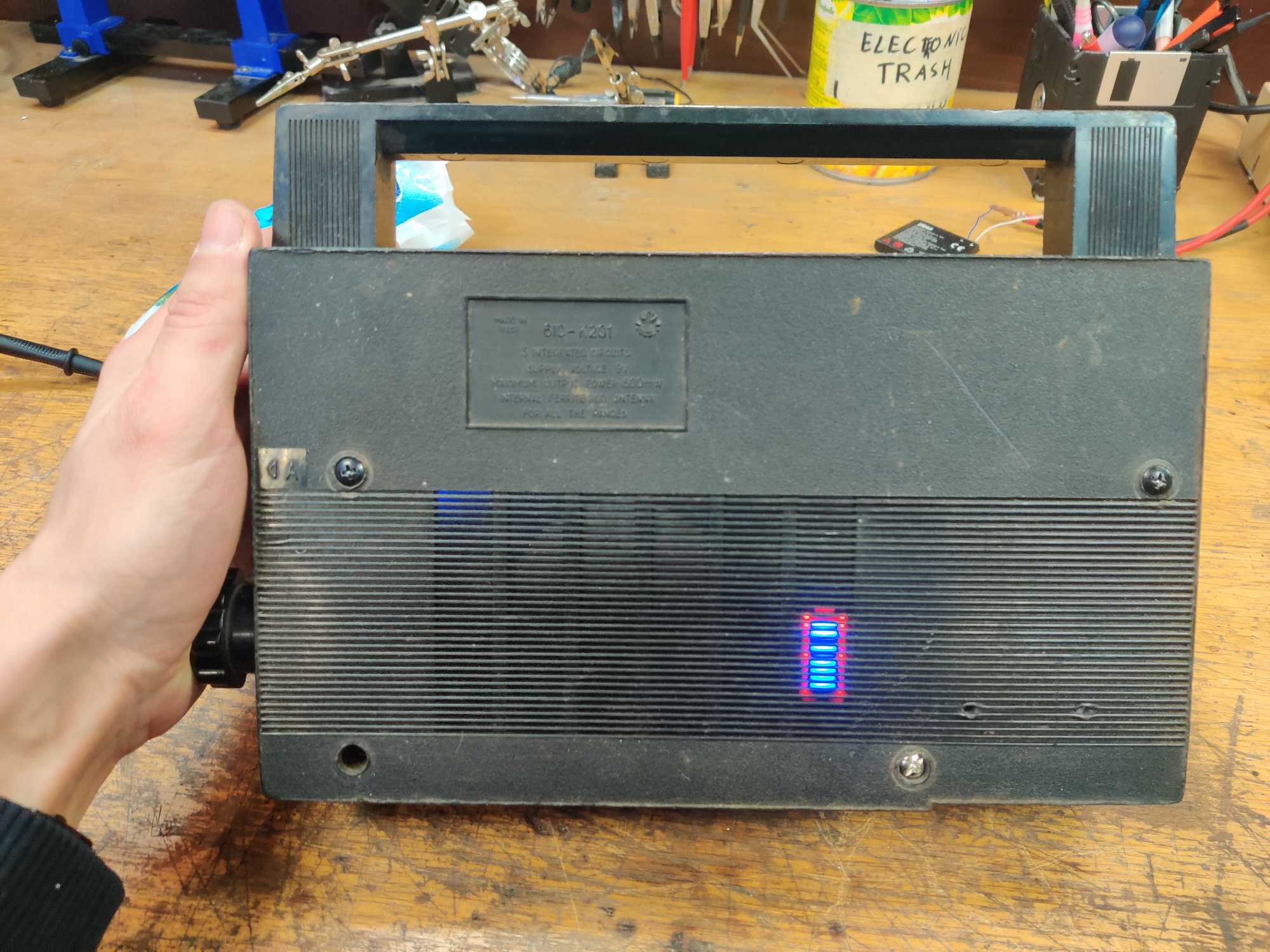 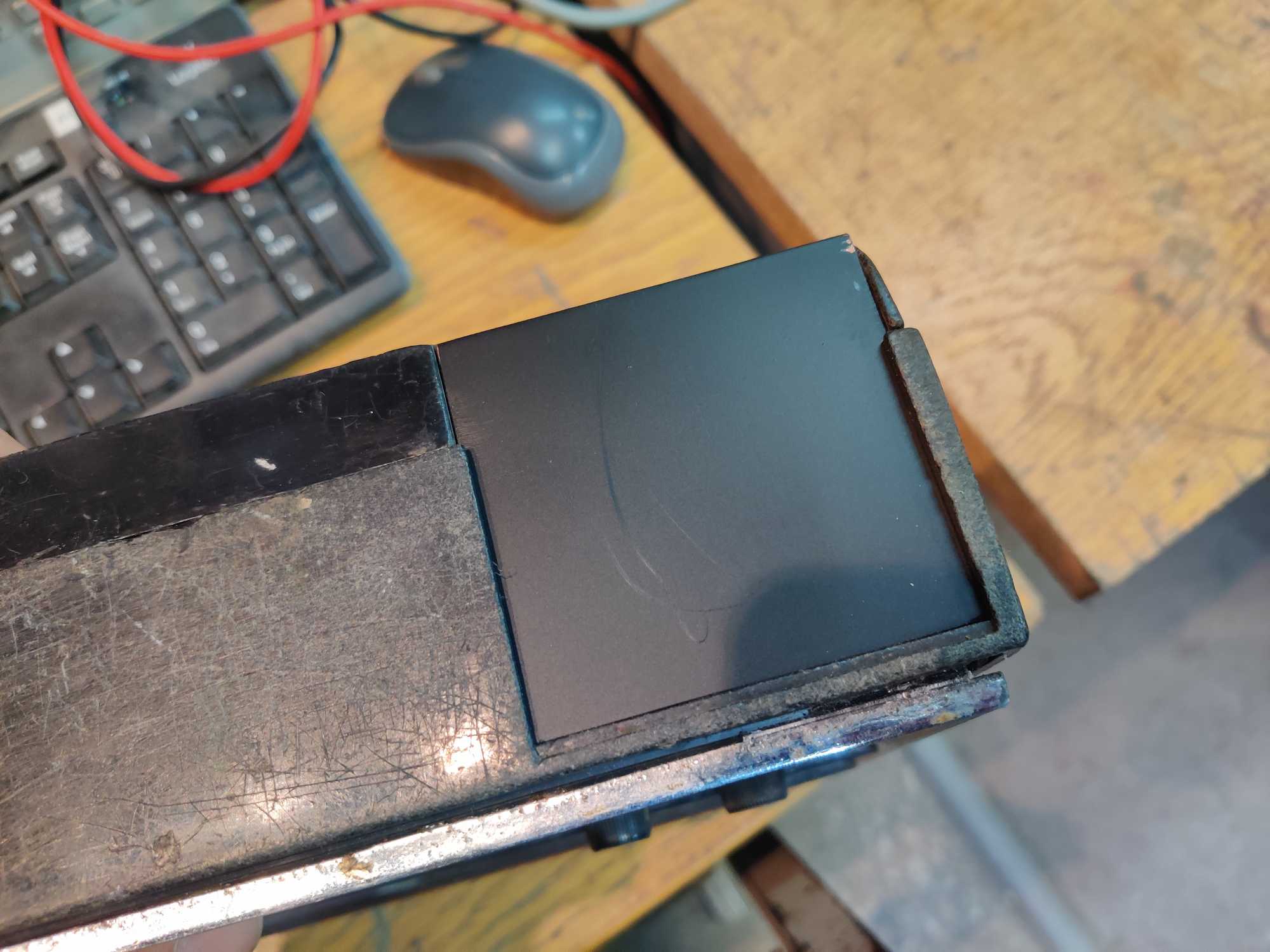 And with that it was done! here’s a video of how it works: