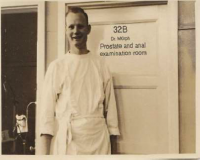 I tumbled the clip out of the gun and shucked the cold brass into my hand, counting until I reached eight. My hands shook, and sweat trickled down my brow. Two shots. She had fired two shots, and I had slept right through it. The bullets clinked together as I dumped them in my belt-pouch. The sound of falling, dripping water was deafening in the silence.

After a time, the stillness penetrated me. I sank to my knees and ran my hands along the ground. The stone was smooth and wet, slick with moss and algae, poor footing but excellent breeding ground for all manner of germ-ridden beasts. Glinting eyes in the darkness answered my suspicions. I reached for my gun to ward them off, but some instinct warned me not to fire. I realized whatever had taken Sophia was not afraid of bullets. I let my gun rasp back into its holster with my hands now firm and steady, if covered with filth of unknown origin. The shell casings reflected the light of my headlamp, distorting it into an oval. I sealed them into an evidence bag and pocketed it for safekeeping.

The ladder rattled as I climbed it, a deafening cacophony of shrieks and crashes, rusted metal protesting my movement. I banged open the trapdoor and stepped out of the sewer, my boots squeaking on the dusty granite. I realized that nothing I had worn down here would ever be fit for the surface world again, then dismissed the thought as irrelevant. I could worry about my wardrobe after this was over with. Goodness knows the doctor would be paying me enough.

The once-bright light of my headlamp had been reduced to a steady glow, and I retrieved the lantern from my pack. Its brilliant LED threw blinding light in all directions, casting stark, looming shadows on the walls. The fresh batteries I had retrieved clicked into place, and my headlamp sprang to life. I decided I would keep the lantern on. Shadows gathered in every corner, and fear gnawed at the back of my mind. Whatever had gotten to Sophia could be coming for me next.

I shouldered my pack and moved on. There would be time to mourn later. Pain and fear clouded my mind like fog across the moors, rending open my armor and leaving me vulnerable to the memories that flooded back. I saw the world dissolve before me, and there I stood, ten years younger and a different man. Berlin, July second, 2003. It was a quiet street, a dark alley, really, and I had no idea how the little girl had found her way down it. Most likely, she was lost. I turned, raising my hand to stop the bullet that I knew was coming. The girl meant no harm. She was lost, alone, frightened. I heard a dull roar, saw the flash, the barrel raised.

I cradled her body, watched the life drain out of her eyes, the fear, the pain, the hesitation.

“Mommy,” she said, begging me. I had no answer to the question that she asked.

“You’ll see her again soon,” I promised. I had believed so, once. At that moment, I had been less certain than I ever had before. It seemed I hung on to it from desperation, a faith that had never been my own until I met the girl, a faith that now in that moment I had called upon to help me save her, a faith that had been lost to me when she had left the world. I did not know how God could watch and let her die. It could not be. He could not be the God I had been taught to fear in Sunday school.

That day, it rained, a cold, pale drizzle that soaked the body with a creeping cold and numbness. I felt dead inside, a loneliness and abandonment that I had never felt before. There was no God, or if there was, he did not care. A little girl had died because I could not save her. I had been ready to take the bullet that had found her, to die in her place, and yet a part of me had been unable to. I was too slow, or I was too cowardly. I did not know.

I had stayed with special forces for five more years, and then I had left. I had never gotten over it, and now I saw it before me, as plain as day. The bullet, the gun, the flash. The flash, and then the body, blood pooling on the chipped, cracked brick, staining red the small white dress. So small. So fragile. I felt hatred blossom in my chest, saw the man that I had killed, the gun that I had fired into his lifeless body, pulling again and again until all I heard were useless clicks. They had found me there, standing over the body. Police had taken me in to the station. I had been worried for a moment that I was finished, that they would get me for murder. Then command had intervened. The German government had been more than willing to release me. I remembered her mother on the way out, asking if I was the man who had shot her daughter. I told her I was not.

The mother’s face came back to me, streaked with tears, mascara running down her cheeks and blotching around her eyes. Her lipstick was smeared from the wiping of her face, and still the teardrops glistened, the pure expression of a mother’s grief. She wailed and gnashed her teeth, and the bible verse sprang into my mind half-formed about the fate of those who would never see heaven. I wondered about their mothers. How could anyone be happy when their child had been damned? My faith had been shaken then, and never since had it recovered. I still didn’t know who I was, or what I was doing here. I simply couldn’t believe in the existence of a loving God who would allow such things to happen. My heart was empty with the loss. For so long I had depended on the faith that had sustained me in my times of pain and suffering. I had believed in God, and ceasing to was like the loss of an old friend. I felt the pain so deeply I wondered several times if I would take my own life. And yet I still could not, for although I no longer believed in God, yet still I believed in sin.

My own tears stained the dusty ground I crawled upon, bereft of my ability to stand. I staggered to my knees, then to my feet, clawing against the wall for purchase. The girl came back, and she was standing there, an apparition that could not exist and yet was real, a ghost come back to haunt me from the dead. The ration of my mind denied her, and yet there she stood, so real that I could see the rising and falling of her chest. I reached towards her, and she disappeared, returning to her form behind me as I spun around. I fell backwards and crawled away from her, begging.

“You killed me, Naissance. You lied to her.”

“You let him do it. That’s the same as doing it yourself. God knows, Naissance. That’s why he didn’t help you save me. He wanted you to be damned, damned forever to suffer for your mistakes. That’s the God that you believe in, John. A God of vengeance. For is not it written, he who causes a child to stumble would be better off if he had tied a millstone around his neck and drowned? You can’t escape God’s judgement. He is coming for you.”

“No, John, you don’t. Please stop trying to. You’ll only give my mother more despair to grieve over. Did you know she hung herself? Never to see heaven, separated from me forever? I bet you didn’t. You didn’t even care. You never called her, never told her why. She died thinking you had tried your best to save me. She thought you had been cursed by God to fail, that God had taken me from her. It was you who were cursed, not I, and she never knew it. You are doomed to repeat your mistakes, Naissance, and to pay for them. You know of whom I speak.”

“Then listen closely, John. John? John? Look at me, John. You’re not listening! Wake up, Goddammit!”

I saw her through bleary tears. The face was wrong. Not the girl. Sophia. Her features were unmistakable, her hands clasped around my face. My face turned to despair. I had to save her, and I didn’t. We were dead together. That was the only explanation. Soon, I would be be sent to hell to pay for my crimes, and she would go to heaven. I couldn’t bear that. I took my gun out of my holster and put it to my head. I didn’t know what happens if you kill yourself when you’re already dead. I didn’t care. I had to leave, to go before I stained her with my sin and guilt. It was the only chance she had of making it. I pulled the trigger.

A gun. A flash. And then it all went black.