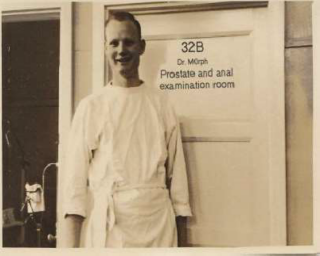 I reached for my Model 29, but the cold press of a Glock in my side stopped me. I slowly put my hands back on the table, letting out a sigh. I knew when I was beat.

The dame reached into my pockets and inside my jacket, putting my Model 29 and 1911A on the table along with the tranq gun the doctor had given me. Taking the clips out, she tossed them to her sister, leaving the empty weapons on the table. Sophia strode over and retrieved the doctor’s tranq gun. She studied it carefully.

“Recognize the craftsmanship, Jerry?” she asked, and he nodded.

“Doctor Noire. I’d heard legends, but I’ve never seen any evidence to back them up. Until now, that is.”

“Mordred Phain is his real name, or at least as real as we can tell. We don’t know anything about his background.”

“Then why does he think you’re after him?” I asked. She looked at me in surprise, and her tone was one of utter incredulity.

“You spoke with him?”

“Briefly. He told me you were looking into him and his activities and that he needed to know how much you had uncovered. I had no option but to take him up on his offer.”

“Five thousand if I brought you back to him, or my secretary in your place if I didn’t.”

“Constanzia?” she asked. I blinked and nodded, put off by how much she knew about me. I hadn’t spoken with Constanzia since this whole mess had started.

“The same way I know your name is John Naissance and that you served two consecutive tours in Afghanistan. I have my sources.”

I sized her up. Same dimensions as her sister, obviously, but with a different posture and demeanor — more confident and self-assured, carrying her body in a way that told me she knew how to use it. She would be far deadlier than her twin in combat, I presumed, and much more resilient under mental and emotional duress. There was almost an air of being the eldest about her, and I made a mental note to find out if she had come out first.

“I’m sorry that your sister got caught up in this. I never meant to harm her.”

“That’s neither in the here nor now,” she replied. “What’s important is that we stop the doctor before he executes his nefarious plan.”

“We have no idea,” she admitted. That’s why I’ve been keeping tabs on him. We know he has connections to most of the major crime families and drug cartels in the western hemisphere, and probably around the globe as well. He could be planning something with any one of them.”

“And how are you sure he’s planning anything?” I asked, feeling as though I was still in the dark.

“We’ve kept a satellite on his position. It’s picking up high levels of gamma and X-ray radiation, but he’s masking it well enough that none of the major Earth observatories has picked it up yet. That could change, and if it does there’ll be a widespread panic. Obviously the British government would prefer to avoid that situation.”

“As would the American one, I’m sure,” Maria added. “I’ll report back to my superiors on the secure channel. At the very least, they should allow me to stay here until this mission is complete.”

“Is that wise?” Sophia asked.

“Perhaps not, but it will give me an official reason for my presence here. If all goes well it might even spare me some heat when I get home. I’m not supposed to be here, you know.”

I watched as Maria got up and walked into the second room, drawing a clip-on earpiece from her belt. I had no idea where she’d gotten it, but then again, I’d never searched her. She’d pulled a fricking Glock on me, for Pete’s sake.

I shook my head and returned my attention to her sister, who had cleared my weapons from the table and was now sitting on it, facing me. She rested her Berretta on her lap. I studied her, and she let me – odd, although she did the same, for in her position she could easily have avoided my scrutiny.

Like her sister, she was tall, about five eight, and a nearly perfect 34-24-34, C-cup. Her face had a beauty to it that was more Russian than British, although it was clear from her accent that she was no newcomer to the island. High cheekbones, smooth curves and lines, nothing planar or angular about it, as there would be with a Brit, a Franc, or a German, but with a slight prominence to the chin and a narrowness to the jaw which made the overall impression distinct from the roundness of an American. The skin tone simply wasn’t right for a Spaniard or an Italian, and the posture wasn’t there for any of the above. Definitely Ukrainian. I could see it in the way she held her head and arms. Ukrainian, perhaps moving to the UK at the age of ten or twelve, learning a new language just as proficiency with the old was starting to set in. Coming from a place where freedom was not the norm and expectation, deciding to defend it with her life. I felt myself beginning to gain a modicum of respect for her. Then I realized I was getting a bit ahead of myself and decided to ask her outright.

“Thirteen,” she replied. “I was taken to the States against my will and separated from my sister. I was rescued by a German businessman who was living here on the island, and he brought me home with him as his daughter. When I was old enough, I joined MI6 and started looking for my sister. I found her when I got word that someone was looking into me by my old name, the one I left behind me in the Ukraine. Sure enough, it was Maria.” She paused, lost in reflection.
Then her eyes refocused and she turned her piercing gaze on me. “How did you know?”

“I observed,” I said. “Mostly your facial features and your posture. I knew you had to have some Ukrainian in you, and I took an educated guess.”

She cocked an eyebrow and looked me over for a second time. I let her do so, keeping my poker face on and meeting her eyes when she had finished. She looked me up and down a third time, and then she leaned closer, speaking softly enough that I had to learn in to hear.

“I see the way you look at me, you know. I’m used to it from men. But you really ought to know something.” She brushed my hat back, her voice dropping to a whisper as she brought her lips within a couple inches of my ear. “If you ever lay another hand on my sister, I’ll eviscerate you.”

I swallowed and composed myself before I spoke.

“Nothing she doesn’t want,” I promised. She chuckled in amusement.

“I like you, Mr. Naissance. You play a dangerous game.” She draped her arms around me and planted a kiss on my cheek. Before I could recover, she detached herself and strode across the room to meet Maria, who apparently had finished with her call. I stared dumbfounded at her, then shook my head and snapped out of it, refocusing on her face, which I soon discovered wasn’t any less distracting. I closed my eyes and took a few deep breaths. It seemed to help.

“What?” I asked, aware that I had missed something. Maria repeated herself.

“I’m in. But what about you? Are you ready to help us take on the doctor?”

“Absolutely,” I replied. “When do we get started?”