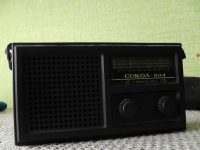 Hello. This time I’m gonna write about another antique thing that I had found in the basement when I was moving elsewhere to live. That was ~3 years ago and the thing is an very old Russian radio “Sokol-304”. The radio itself is ~25 years old probably (older then me :O) and the best part is – it works just as great. Of course, the contacts were rusty so I had to replace them but all you need for it to work is batteries.

But with this radio I can only catch MW and AM waves, and only thing now being broadcasted over them are some unknown radio stations, wicked, weird, creepy music and propaganda. I was able to catch waves from 3 countries – Poland, France and Russia. See the video below :)

More about this radio: http://www.radiomuseum.org/r/moscowtemp_sokol_304.html