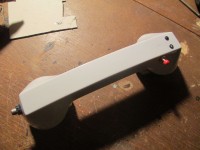 The other day I finished assembling this thing. I’ve been seeing these “retro bluetooth handsets” on the market for a long time and I love old things, but those are quite expensive, depending on the brand, price on ebay ranges from 20-40$ which is… too much for a toy like this.
I had made one before from not-so-old office phone. The quality of it was crappy, on some phones it was ok, on some it wasn’t… overall crap and I didn’t use it that much. But just recently I somehow regained interest in making a better version and here’s how I did it.

It all started when I stumbled upon a video from Make magazine:

So I ordered a cheap bluetooth hands-free from ebay for 3.37€ and when I got it I disassembled it the next day.
In the video Kipkay used one with a replaceable battery, but luckily my was rechargeable. And after disassembling the phone handset where it’ll all go I made a list of parts I’ll be needing for this project, went out and bought them. Now I was ready to assemble it. Started out with soldering the extension wires and the PCB looked like a giant cockroach. This part was the hardest, because of the very very small (SMD) components, it was hard to make contacts strong enough and still not to overheat the components on that board. It took me few hours of careful soldering and gluing the wires to a PCB to get it done properly.

Then, I drilled 3 holes for 2 LED’s (blue and red) and a momentary switch. Momentary switch had to be fitted a bit on the side, so that the speaker would fit, and it actually was a very good place for that switch, put the bluetooth PCB inside and ran the wires through. Speaker assembled nicely, microphone needed some tinkering but eventually I got it all together. The charging socket was put at the bottom where a phone wire was. The end result is pretty nice. It still works properly, I can hear people loud and clear, they can hear me normally as well. There is some voice distortion when I talk, but it’s very small. I didn’t use a 680ohm resistor that I bought as Kipkay did in his project, but I didn’t need to. I’ll do some more testing, if it’s bad then I’ll need to test out various resistor values and see whichever works.
Overall cost: 9€

Edit 2015-11-16: after some more testing, I added 1kohm resistor, it seemed to remove the very sensitive noises. The voice still sounds like a robot, but people can hear me clearly.