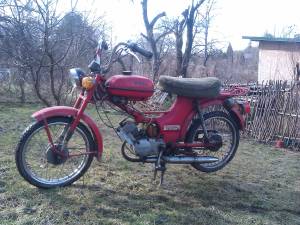 Greetings. This is my first post that I’ll start off with an intro.

I got this old moped from my grandpa. It has been sitting not working for a while and only now I was allowed to take it.
It will need lots and lots of work done because it’s in a really bad shape. Last time I tried to crack it up it was working – that was about 3 years ago and 2 days ago when I pulled it out from the under ground it won’t start… had to use a hammer and some muscle to get it out… bent a bit of the leg in the process, but nothing serious.

So it’s now out and ready to be restored. I started off with an inspection and this thing needs almost every part replaced. From light bulbs to gas tank.
Heh it’s not really THAT bad as it may sound. It’s just minor fixes – the gearbox is what I am worried about.

After further inspection I made a list of things I need to replace. The list is not very big, but will require some work.

The handles are very old and worn off, breaks does not work properly, if at all :D light bulbs are burned out, the seat was ripped a bit, it’s all covered in oil, the gas tank is rusty as heck – gonna try to clean it somehow, the tires are very old and explode if you try to inflate it (front tire exploded, didn’t want to inflate the rear one).
And there was some other things I can’t remember now…

On Sunday I might go to a market where people sell old stuff, that is the best place to get some moped parts.
Right now I am just waiting for the weather to get warmer so I don’t freeze my fingers off repairing that thing, so I’m cleaning and repairing separate parts instead, like the seat and the speedometer.
But I’ll have to take it all apart to clean that oil off.

And here is a photo of how it looks now:

Btw here are scanned pages of a Riga-22 service manual in Russian language. I found it on the internets after lots and lots of googling. I had to crop and rotate all of them because they were badly scanned: DOWNLOAD

I should do some progress this weekend, so come back :D